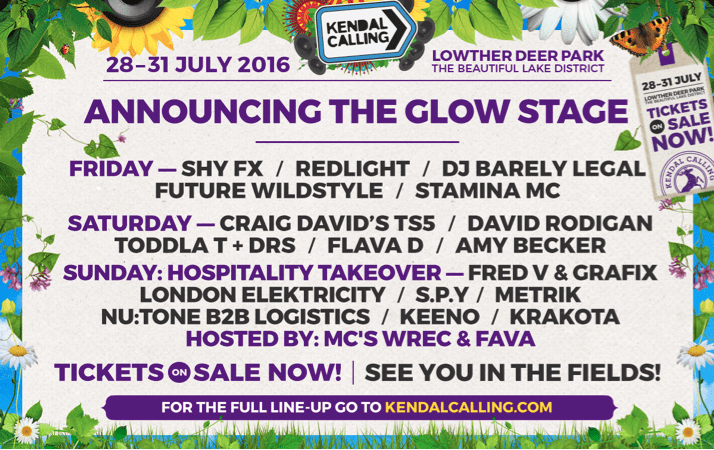 Having sold out their 10th birthday edition a whopping 19 weeks in advance last year, tickets are now flying out for Kendal Calling 2016. Returning to the beautiful Lake District in 2016 with huge headliners Noel Gallagher’s High Flying Birds, Rudimental, Madness and The Charlatans, the festival is now pleased to announced its ever-popular Glow Tent dance lineup for 2016.

The place to be for dance-loving Kendal Calling visitors, the Glow Tent is one of the must visit parts of the festival. Joining Previously announced headliners Craig David, David Rodigan MBE and Toddla T legendary pioneer and godfather of drum and bass Shy FX heads up the Glow Tent alongside dance duo My Nu Leng and the princes of smooth retro tinted UK Garage Eton Messy. One of the most sought after names in bass music, Chloe Robinson AKA DJ Barely Legal also joins the lineup alongside SYV and Future Wildstyle. Grime and Garage star Flava D and genre-straddling DJ Amy Becker will also appear across the weekend.

Drum and Bass royalty Hospital Records are taking over the Glow Tent on the Sunday for one of their world renowned Hospitality Takeover shows. Hosted for the day by non other than Dynamite MC and Wrec & Fava the lineup includes a plethora of names from what is undeniably one of the most well recognized names in drum and bass. Chart toppers Fred V & Grafix present their latest album Oxygen supported by CEO and Founder Tony Coleman AKA London Elektricity with the day also boasting sets from SPY, Metrik, Nu:Tone and Logistics B2B plus young guns Keeno and Krakota.
Set in the stunning surrounds of the Lake District’s Lowther Deer Park, this innovative, independent festival is renowned for more than just music and festival lovers will also enjoy 4 days of arts installations, comedy, gourmet food, kid’s entertainment and a real ale festival all within the confines of what is widely regarded to be the most beautiful festival site in the UK.

With the festival fully established as one of the undisputed highlights of the busy summer calendar, Kendal Calling 2016 is not to be missed.  Tickets always sell out for the festival well in advance and for the first time Kendal Calling is not increasing it's capacity so grab your ticket now and see you in the fields!