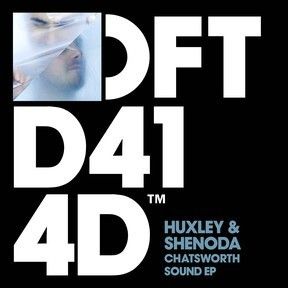 Huxley & Shenoda are two of the most in-demand producers on the underground house scene and the ‘Chatsworth Sound EP’ is the pair’s full collaborative debut. Long time friends and label mates on Hypercolour and Huxley’s Saints & Sonnets, the duo have undeniable studio chemistry and ‘Chatsworth Sound’ debuts it beautifully.

Opening with warped, sweeping synths and a crisp hi-hat shuffle, ‘I Don’t Know’ is the perfect marriage of garage shuffle and four-to-the-floor house thump, the spoken word vocal adding a classic Chicago vibe before heavy, metallic bass throbs take control of proceedings. Treading the fine line between heady atmospherics and straight up dancefloor appeal with aplomb, the female vocal cuts through the mix late on and adds a whole new level to what will surely become one of this year’s house anthems.

The appeals of ‘Premier’ are perhaps a touch subtler but no less effective, as a Reece-inspired bassline gives way to beautifully fragile swatches of glimmering synths, before returning alongside a huge kick to lass waste to all who stand before it. This time the vocal takes centre stage with one of the most yearningly hypnotic refrains of recent memory.

Huxley has previously delivered releases for an enviable roster of labels (Tsuba, Morris Audio, Fear of Flying, Hypercolour and 20:20 Vision for starters) and has stayed true to his robust, bass-led strain of house music that reflects his formative interests in UK and US Garage. Whether veering towards deeper vibes alongside Ethyl on his own Saints & Sonnets imprint, turning in cast iron grooves for Tsuba or full vocal barnstormers like his lauded ‘Let It Go’ single for Hypercolour early 2012, there’s a clearly defined but pliable and versatile sound to Huxley productions that marks him out as a truly talented producer.

Laurie Shenoda’s rise through the ranks has been slow but steady. Like Huxley he has also produced for the acclaimed Hypercolour imprint, remixing an early release before going on to then unleash his ‘Shots’ and ‘On & On’ EPs in 2011 and 2012 respectively, the latter of which was cherry-picked for Mattias Tanzmann’s ‘Fabric’ mix. This was quickly followed by ‘A Homage’ EP on Hypercolour off-shoot Losing Suki, described as “a new breed classic” by Matthew Dear, it received Radio 1 play from Skream and Benga as well as props from the man’s usual peers including Jimmy Edgar and Axel Bowman.