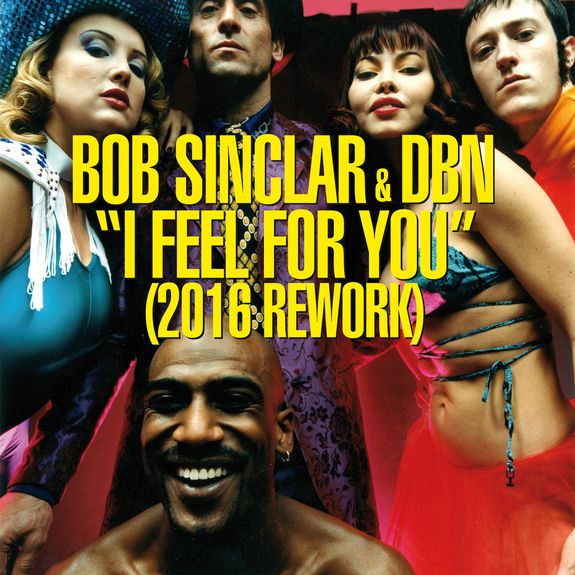 German trio DBN have partnered up with house legend Bob Sinclar to create a unique revision of his classic track ‘I Feel For You’. Their collaborative 'I Feel For You (2016 Rework)’ is out now on Bob's label Yellow Productions and is available via Traxsource for a 2-week exclusive period before being made available to purchase at all digital retailers.

DBN and Bob Sinclar’s friendship and collaboration stems back several years from when the German trio remixed Bob’s track ‘What I Want’. After years of playing it in their sets and receiving such positive reactions from their fans, Bob asked DBN to team up with him again, this time for a fantastic bass heavy rework of his track ‘I Feel For You’.

Patrick Kroepels (DBN) – “A few months ago we were going through all our old DBN productions and we rediscovered our official remix we did a few years ago for Bob Sinclar presents Fireball – ‘What I Want’. We did an up to date re-edit of the track and sent it to Bob and thankfully he loved it! A few days later he got back in contact and asked if we could do a 2016 rework with him of his track ‘I Feel For You.’ We were totally speechless as the track is one of our absolute favourite house classics, which had a huge influence on our music. It has been an honour to work together with such a legend on such an influential club classic!”

Putting a contemporary spin on the original club classic which was released in 2000, DBN and Bob’s collaborative remake incorporates the classic DBN smorgasbord of house melodies with an up to date electro house beat, resulting in an energetic dance-ready cut that serves as a fitting homage to the original. The legendary vocal line carries the track as it ebbs and flows, building the emotion until a huge release of tension in Bob Sinclar-style that is sure to captivate dance floors around the world.

With a huge recent collaboration with Robbie Rivera, French veteran house legend Bob Sinclar is clearly still a pioneering force in dance music. With a wash of recent releases, Bob and DBN are both pushing forward a genre diverse sound that is sure to explode as 2016 gets into full flow. With support on the track from big names Robbie Rivera, Plastic Funk, Mark Knight and Joachim Garraud among many others