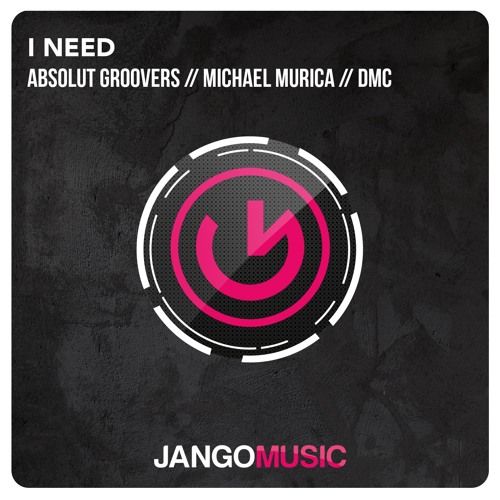 With releases and remixes on labels such as Columbia/Sony Music, Yello and Spinnin’ between them, not to mention backing from the likes of Bob Sinclar, Gregor Salto and Fatboy Slim – Absolut Groovers, Michael Murica and DMC have each clearly been making the right noises with their productions in recent years. Comprising of 2 Italians, a Swede and 2 Welshmen respectively, Absolut Groovers, Michael Murica and DMC have joined forces to produce a club hit, ‘I Need’ which is out now on French label, Jango Music.

In keeping with their own and Jango Music’s high standards and consistency for releasing only the finest House music around, Absolut Groovers, Michael Murica & DMC’s ‘I Need’ is an uplifting, vocal House monster with an infectious groove and deep, funky bassline which has already been doing damage in some of the world’s best arenas. Summer may already be over, however, the boys manage to pack ‘I Need’ full of sunshine and warmth, making it a certain hit and an essential addition to any music-lover’s collection.

Having only been born 2 years ago, French label, Jango Music, have witnessed a meteoric rise to become one of the leading and most respected outlets for quality, funky house music. Having enticed the likes of Roger Sanchez, Robbie Rivera and Luca Debonaire onto their roster, the label’s ascendance continues with the impressive collaboration of Absolut Groovers, Michael Murica and DMC. With more exciting releases in the pipeline, they’re a label to keep an eye on. ‘I Need’ by Absolut Groovers, Michael Murica and DMC is out now, so be sure to check it out!