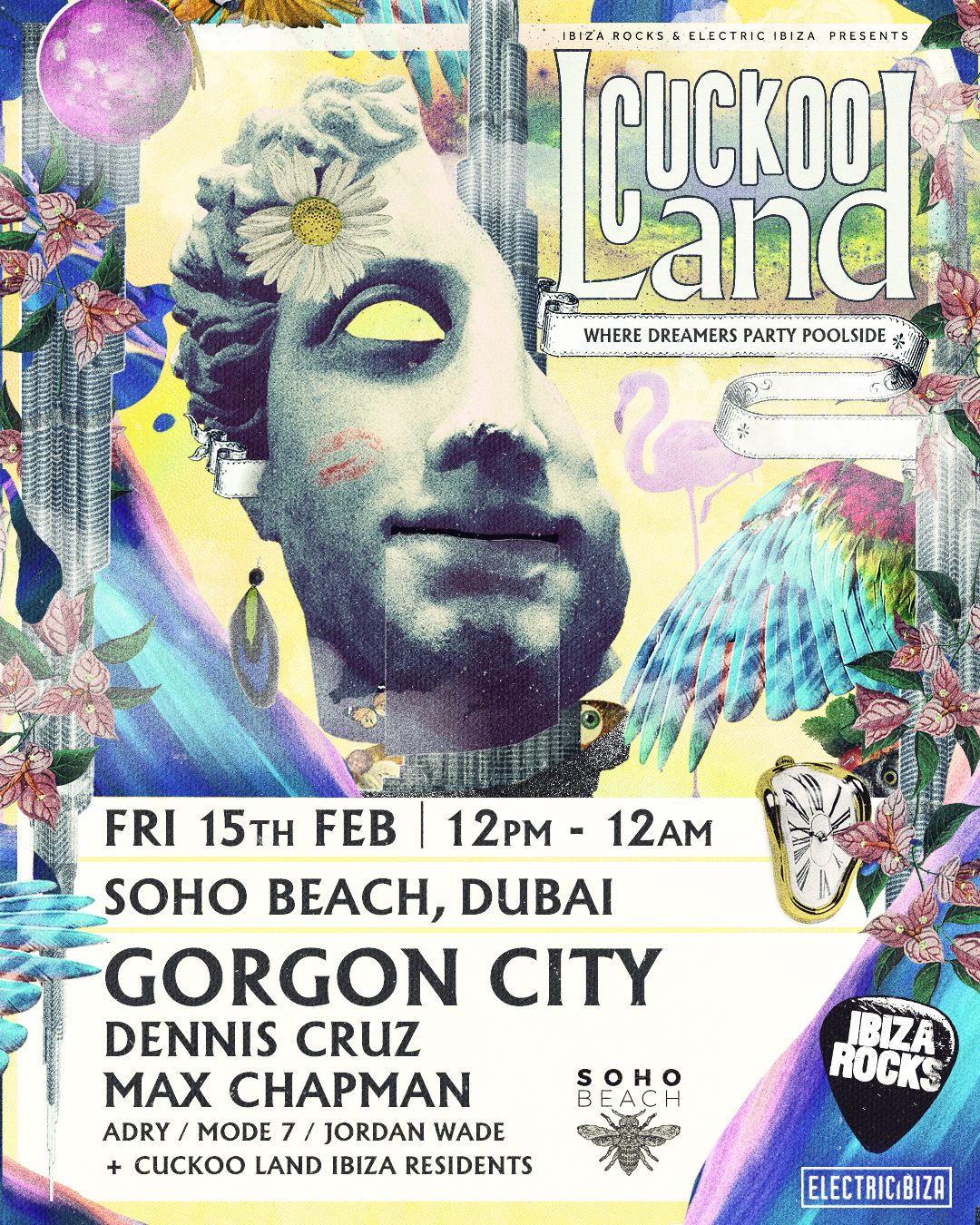 Two of Ibiza’s most loved and respected music brands – Ibiza Rocks Group and Electric Ibiza – are teaming up and taking Ibiza’s No.1 pool party to Dubai’s No.1 entertainment destination – SOHO Garden.  Already a jewel in the crown of the Ibiza Rocks Hotel pool party programme, ‘Cuckoo Land’ will fly the Ibiza nest for the first time and kick-start the partnership with a special party at SOHO Beach within SOHO Garden on 15th February with Gorgon City, Dennis Cruz, Max Chapman and the Cuckoo Land Ibiza residents.

Jordan Hallpike, Director of Talent & Programming, Ibiza Rocks Group said: “Soho Garden is simply mindblowing and opens up so much opportunity for us to work with such a talented team to elevate the pool party experience beyond anything Dubai has ever seen.  Whether it’s pool parties, club experiences or spectacular live shows, there’s scope to do it all and we’re so excited at the prospect and to start the party with Cuckoo Land in January.”

The partnership will bring 6 exclusive events to SOHO Garden, in collaboration with Electric Ibiza, the brains behind pioneering Ibiza brand Do Not Sleep, EPIC Pool Parties in Miami and a history of acclaimed international parties, Cuckoo Land in Ibiza has allured an incredible selection of world-class talent including Claptone, Disciples, Latmun, Waze & Odyssey, Amine Edge & Dance and 2018 resident Sonny Fodera.  Electric Ibiza also has a rich history with their own parties at Ibiza’s leading venues including Amnesia, Café Mambo, Pacha and the legendary Space Ibiza.

Firmly established as ‘the home of the pool party’ in Ibiza, 2018 saw over 60 pool parties at Ibiza Rocks Hotel and welcomed a mix of huge hit makers and hot new talent throughout the summer, with pool party highlights including residencies from Craig David, Rudimental and MK plus Stormzy's massive two-day #MERKY Festival together with the much-loved Cuckoo Land. This will be a Dubai debut for both Electric Ibiza and Ibiza Rocks who have found the perfect partner in Soho Garden Group.

Neil Evans, Director of Electric Ibiza said: "Cuckoo Land parties have been some of our favourite events over the last two summers in Ibiza, so to be able to take a bit of that crazy Balearic party vibe and work with the fantastic Ibiza Rocks team in Dubai at SOHO Garden is something we’re really looking forward to."

The first party will run from midday to midnight and feature mighty headliners Gorgon City, Dennis Cruz and Max Chapman who have each wowed the Cuckoo Land Ibiza crowds as well as individually enjoying huge success on both sides of the Atlantic, testament to their huge worldwide appeal. Gorgon City have taken their bass heavy house sound to sold out headline shows at the likes of Brixton Academy, Amnesia, Ushuaia, and CRSSD Festival, tech house heavyweight Dennis Cruz is a regular on labels like Solid Grooves, Moon Harbour and SNATCH!, whilst Max Chapman’s inimitable brand of groovy tech house has seen him release on Hot Creations and play at world renowned parties at DC10, Hideout, Parklife and more.

Soho Garden is located within the grounds of Meydan; a sprawling 14,000 Square Meter paradise encompassing a 10,000 capacity live stage space and the renowned Las Vegas nightclub Drai’s together with the Bohemian chic pool party location Soho Beach. Supported by a team of international experts that have developed and managed some of the world’s finest hospitality and nightlife venues, Soho Garden offers an unprecedented level of service and opportunity.

John Nemr Saliba (CEO) said: “It is our pleasure to bring such esteemed brands as Ibiza Rocks and Cuckoo Land to the heart of Dubai as we strive to create the world´s number one entertainment destination.”

With a trio of hugely passionate and pioneering partners who are already entertainment icons in their individual right, this exciting new venture is a match made in music heaven. Pool parties with incredible talent, infinity pools, sunshine, high-energy vibes and sublime city backdrops = Happy Days and Happy New Year!