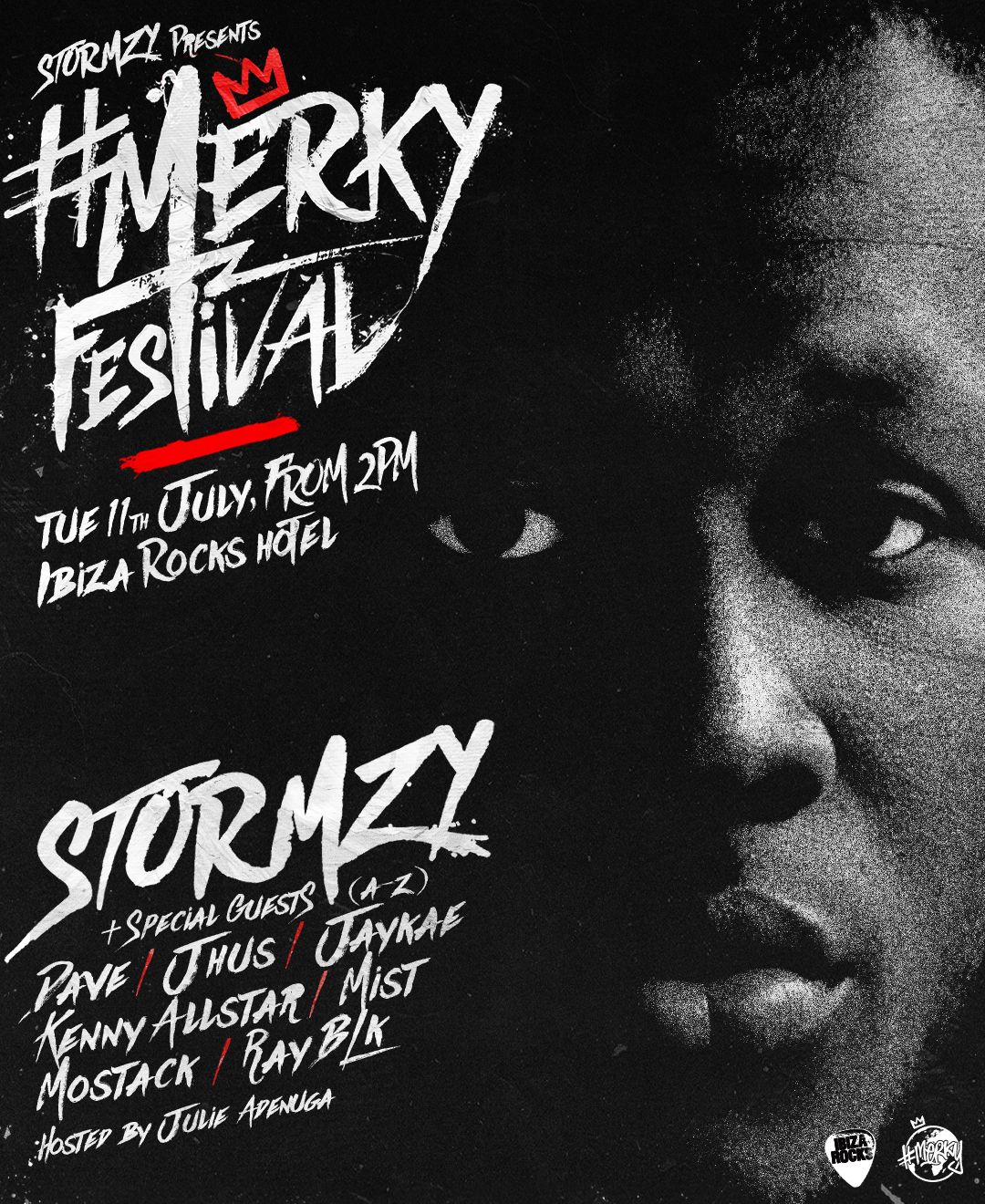 Following the hugely successful monthly #MERKY residency with Stormzy last summer, Ibiza Rocks Hoteland the main man himself have upped the game with the launch of the first ever #MERKY Festival. The one day, multi stage Festival event on 11th July will be hosted by Beats 1 DJ Julie Adenuga and will feature 10 hours of daytime poolside sets, main stage festival performances and indoor hangouts from a handpicked mix of the hottest urban music artists including J Hus, Mist, Ray BLK, Jaykae, MoStack and Kenny Allstar before an electric headline performance from the new king of grime Stormzy.

In 2015 Ibiza Rocks gave Stormzy his first Ibiza show supporting Dizzee Rascal and were so impressed they invited the highly talented, super-focused MC back to headline in August. This led to 2016’s #MERKY monthly residency and this summer will see the next chapter mark yet another seminal moment for Stormzy and Ibiza as #MERKY takes over the whole Ibiza Rocks Hotel for Ibiza’s first ever grime festival.

One man following hot in the footsteps of Stormzy is fellow Londoner J Hus.  The Black Butter Records signing featured on Stormzy’s ‘Bad Boys’ single from acclaimed album ‘Gang Signs & Prayer’, scored a Top 20 hit with ‘Did You See’ and will release his own highly anticipated debut album ‘Common Sense’ on 12th May.

As well as J Hus, Stormzy has fiercely championed fellow South London rapper Dave. Currently one of the UK’s brightest young stars, at just 18 Dave has already turned the heads of the industry and fans alike following his debut Warm Up Sessions on SBTV and subsequently attracted superstar Drake to feature on a remix of ‘Wanna Know’.  Having recently collaborated with fellow #MERKY Festival artist J Hus on single ‘Samantha’, this will provide an incredible chance to see two of the most exhilarating up and coming artists in the UK grime scene.

Staying true to promoting the freshest and best, #MERKY Festival will also feature BBC Sound of 2017 winnerRay BLK – a hugely inspirational woman who made history as the first unsigned artist to ever win the coveted award.  Having chosen to avoid signing a major record deal, Ray BLK self-released her debut mini album ‘Durt’ featuring collaborations with SG Lewis, Wretch 32 and of course, Stormzy.

Representing Birmingham on the line up is the man who officially put the city’s Grime scene officially on the map, Jaykae.  Having started out as part of Birmingham squad ‘Invasion Alert’ Jaykae is fast becoming known for his strong flow, authentic style and dynamic delivery, as well as his hit ‘Toothache’ which shows off his solid, rugged style and has taken the 25 year old next level.

Complementing the line up is DJ, producer and broadcaster Kenny Allstar. When it comes to all things homegrown Kenny has championed his lane in the game spotting some of the scenes finest prospects and showcasing them on local to national radio including fellow #MERKY Festival artists Stormzy, J Hus and Ray BLK.  As well as providing a chance to celebrate his own success and that of his peers, #MERKY Festival will crown Grime king for the day and the music won’t stop until the world’s most famous sun sets on Ibiza’s No.1 party hotel.

Jordan Hallpike, Director of Talent & Programming said: ‘We’re proud to have given Stormzy his first Ibiza gig in 2015 and then Ibiza’s first ever grime residency with #MERKY last summer. This year we collectively wanted to provide a bigger platform to showcase the incredible talent in the grime community.   It’s not only the first festival concept for us but it’s the first grime focused festival for Ibiza and something we’re extremely excited to be delivering with Stormzy.’

With a strong history of giving emerging trends and breaking talent a platform in Ibiza, the promoters of Ibiza Rocks have showcased many ‘firsts’ over the years including giving debut Ibiza shows to now huge talents including Annie Mac, Chase & Status, Rudimental and Disclosure. Since bringing grime legend Dizzee Rascal to Ibiza Rocks in 2008, the groundbreaking promoters have championed the scene, with performances from forefathers of the genre including Wiley and Skepta plus critically acclaimed artists Krept & Konan, Novelist, Boy Better Know, Bonkaz and of course, Stormzy.

Tickets and holiday deals from www.ibizarocks.com.   Book direct with Ibiza Rocks for the best prices guaranteed – up to 15% cheaper than other booking agents.  Sign up to be the first to know more atwww.ibizarocks.com/events