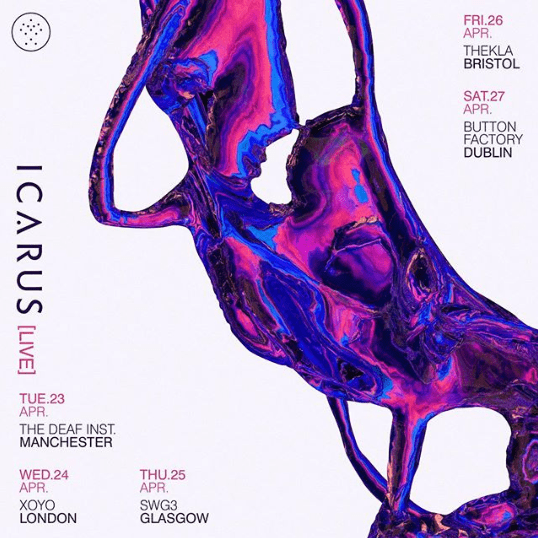 Bristol’s forward-thinking, genre-twisting duo ICARUS are taking their music to the next level as they prepare to take their LIVE show on Tour. Recently touring with Mixmag cover stars, RÜFÜS DU SOL, the pair played at a sold-out show at London’s, Printworks. Embarking on their own UK tour in April next year, they’re set to play five dates across Manchester, London, Glasgow, Bristol and Dublin.

Uniquely versatile, ICARUS are equally adept at crafting tracks across the board, from deep, underground club tracks to crossover airplay hits, along with more experimental fare. The pair continue to push boundaries with their music production, bringing their work to life with live elements; adding a new dimension to their shows.

Recently releasing tracks ‘Echoes’ and ‘Man Of The Land’ on the legendary FFRR, both have seen substantial radio support from Radio 1 by industry tastemakers such as Annie Mac, Pete Tong, Danny Howard and Phil Taggart. ‘Echoes’ saw particular success reaching #3 on the BBC Radio 1 Dance Chart, with a further addition to Apple Music’s A-List Dance playlist.

Having taken their live show on tour earlier this year, ICARUS sold-out Londons, Electrowerkz, along with attracting the masses at Leeds Festival, Boardmasters, South West 4 and Café Mambo in Ibiza. Five consecutive days, kicking off at Manchester’s, The Deaf Institute will see the duo take the stage at XOYO in London and Glaswegian institution, SWG3. Touching down in their hometown, they play the award-winning Thekla, before rounding off the tour in Dublin at Button Factory.