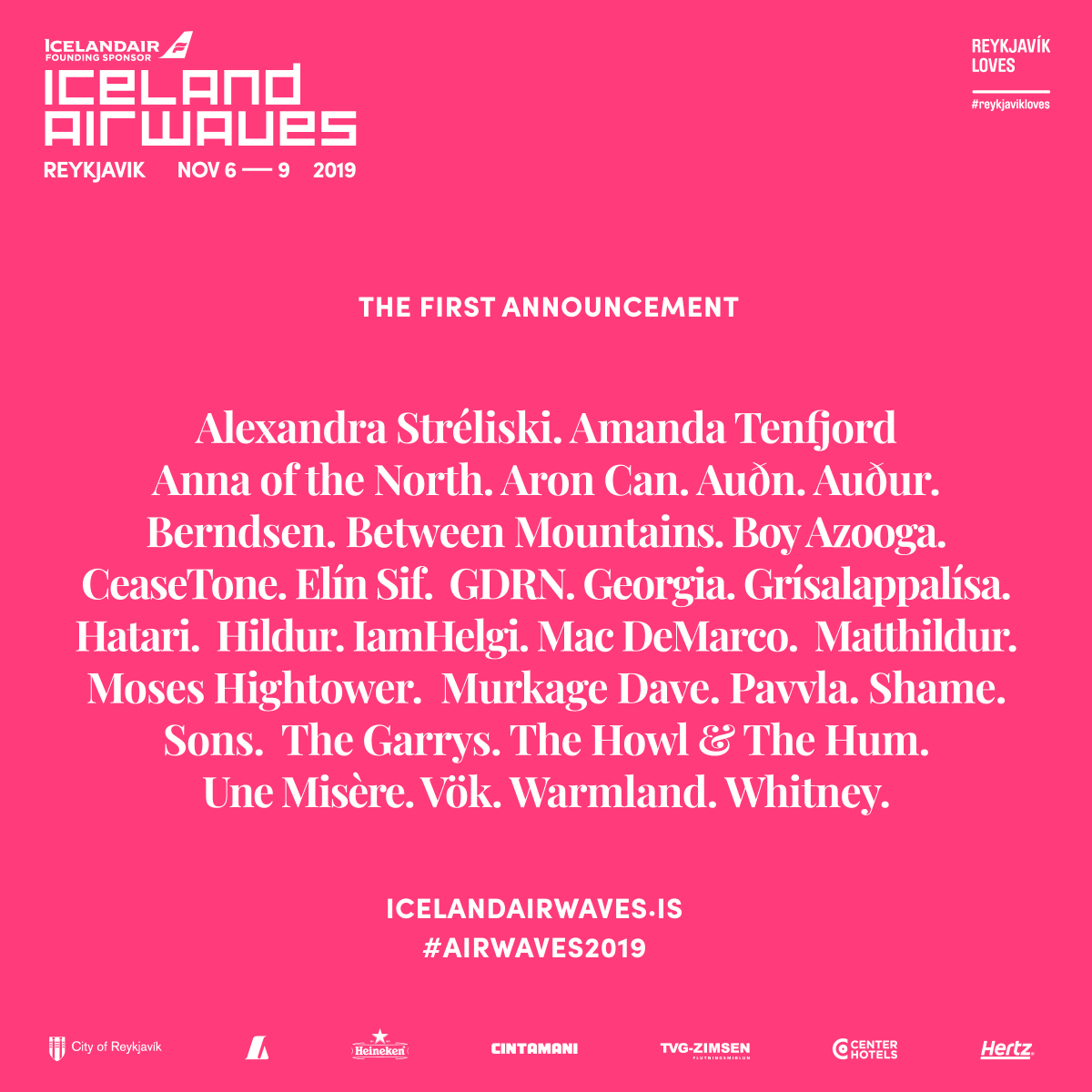 Iceland’s longest running music festival moves into its third decade with a fresh and revitalised mission. Iceland Airwaves is well established as the most unmissable event in the Reykjavík calendar, and an unparalleled space for collaborative local creatives to air new projects. The world’s northernmost new music showcase is back to booking the right acts and looks ahead to inviting over 6,000 international visitors for a unique and truly global gathering on 6-9 November 2019.

The first names revealed this year include Mac DeMarco, a firm festival favourite wherever you are in the world, who returns for the first time since releasing the seminal 2 LP in 2012. With his live shows renowned for their raucous spontaneity and endearing humour, the Canadian songwriter has grown to be one of the most compelling and addictive performers of a generation.

A showmanship surely matched only by the likes of Reykjavík's Hatari, probably the most talked about band from Iceland Airwaves 2018, who will provide another opportunity to those who haven't previously squeezed into one of the packed downtown venues to witness their outrageous live show. The industrial masters of hype, shock and awe started the year by storming Eurosonic and are in the running to fly the flag for Iceland in the Eurovision Song Contest in May.

Chicago country-soul band Whitney will be heading halfway across the Atlantic after releasing the long awaited follow up to the critically acclaimed debut album Light Upon the Lake during the year, whilst GDRN, Matthildur, Hildurand Vök represent the forefront of soulful, synth led Icelandic pop. GDRNpicked up awards for Newcomer of the Year by Grapevine and a nomination for the Nordic Music Prize, Hildur receiving Pop Song of the Year at the Iceland Music Awards and Vök are busy touring the UK and US, having recently signed to Nettwerk.

Also adding to the first international acts, to take over the historic downtown area of Reykjavík for 4 days and nights, are Georgia (UK), Alexandra Stréliski(Canada), The Howl & The Hum (UK), Sons (Belgium), Murkage Dave (UK),Pavvla (ES) and The Garrys (UK), and completing the first announcement of the local line up are a host of glacial indie pop bands Between Mountains, Ceasetone, Elín Sif, Berndsen, Warmland, the electronica songwriter IamHelgi, jazz band Moses Hightower and leading R&B/hip hop artists Aron Can and Auður.

Will Larnach-Jones, Head of Marketing and Operations at Iceland Airwaves, says:

“Iceland Airwaves is all about discovery. 2019 builds on last year’s mission – to return to the ‘heart’ of the festival and shine light on the world’s best emerging talent, local stars and interesting artists – all within the warm, electric atmosphere of downtown Reykjavik. Whether you’re a budding gig goer or a seasoned industry professional, Iceland Airwaves is hands down the best long weekend for music lovers there is.”

Iceland Airwaves has a long history of bringing together the world’s most forward thinking acts with the best Icelandic talent and attracts visitors from over 60 countries each year. With its influence turning Reykjavík into a global music city, and with more and more events emerging around it as a result, Airwaves is unrivalled in its programming and reputation after 21 years. Airwaves remains the only festival where you can experience shows in spaces as varied as art galleries to churches and concert halls all in easy walking distance within the downtown 101 postcode.

You can check out music from the first announcement over at the Iceland Airwaves Spotify playlist and watch the announcement video on YouTube.