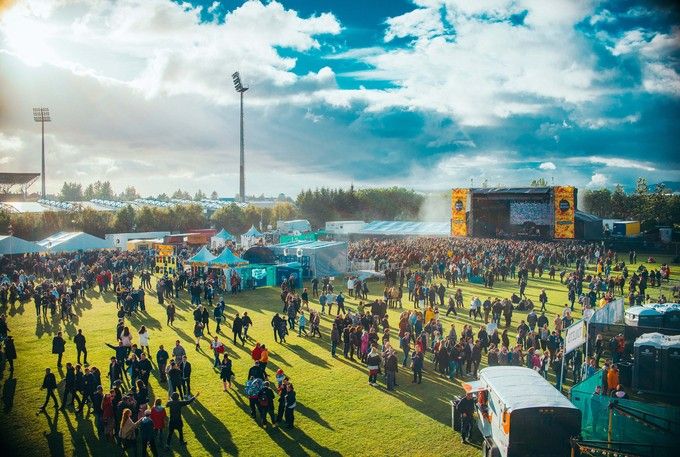 Catch Slayer on their Final World Tour and Trap Pioneer Gucci Mane at The World’s Most Unique Midnight Sun Festival.

Following on from their recent phase 1 announcement, Iceland’s Secret Solstice is pleased to announce its second wave of artists with iconic metal band Slayer who are on their Final World Tour, rapper Gucci Mane, and electro-pop group Clean Bandit who are all playing in Iceland for the first time. Now in its fifth year, Secret Solstice will once again take place during 96 hours of continuous sunlight over the summer solstice June 21-24 showcasing the best in local and international rock, hip hop and electronic music in the world’s most unique festival setting.

Two-time GRAMMY winners Slayer are long-reigning titans of punk-thrash who alongside bands like Metallica helped define the thrash-metal genre throughout their 34 year career. Touching down in Iceland as part of their final world tour fresh off their North American dates, this is a rare last opportunity to catch the legendary band. American rapper, label owner, and Billboard chart-topper **Gucci Mane **who’s lucrative career is soon to be the subject of a Paramount biopic, is credited as pioneering the hip hop sub-genre known as trap music. The god of trap will no doubt bring his colorful beats to the Secret Solstice main stage. British genre crossover group Clean Bandit best known for their hit single “Rather Be”, seamlessly blend classical music with pop bringing together strings, piano, percussion, vocals and electronic beats. Their refreshing take on modern pop music and reputation for incredible live shows will be sure to captivate Secret Solstice festival goers this June.

For those looking to splurge, Secret Solstice is pleased to welcome back two limited availability luxury tickets: Oðinn and the Package of the Gods. With the Oðinn pass, fans will receive special treatment and amenities from arrival like priority festival access, entry to the new Oðinn pop-up lounge, complimentary food and drinks at the festival, backstage access, side event discounts and more. With only three super exclusive Package of the Gods tickets available, the extravagant festival pass is perfect for fans wanting to enjoy their favorite artists in serious style. Encompassing everything offered to Oðinn members, the luxurious pass also includes helicopter transfers to glaciers and lava tunnels, complimentary access to all side party events, luxury accommodation for two, a private Icelandic dining experience and more amazing perks still to be announced.

Set against the backdrop of the stunning natural surrounds of Iceland’s breathtaking scenery, there are many reasons to tick Iceland off your bucket list this summer. Tourist attractions abound including volcanic beaches, epic midnight sunsets where daylight reins 24/7, Game of Thrones filming locations, jaw-dropping waterfalls and the infamous Blue Lagoon. With once-in-a-lifetime add-on side events taking place inside unique and otherworldly places like glaciers and lava tunnels soundtracked by exceptional music talent, Secret Solstice caters to destination festival goers with a passion for the natural beauty of the great outdoors.

This is the second of three waves of artists to be announced for Secret Solstice Festival 2018.

Full tour packages including flights, tickets and accommodation with Iceland’s top services including hotels, rentals, and airport transfers will also be available for the 2018 edition. More details coming soon!