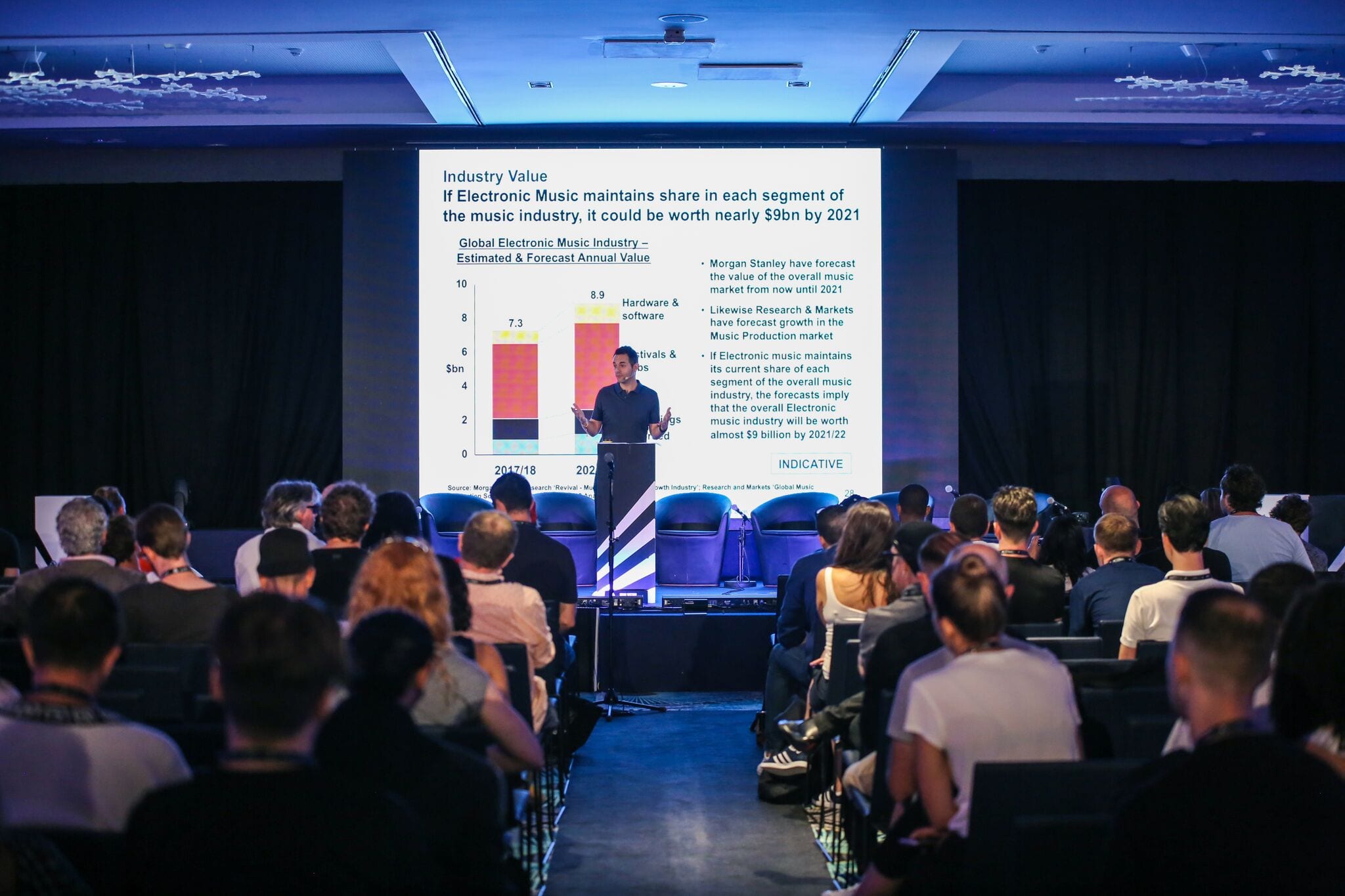 International Music Summit today released the annual IMS Business Report, an in-depth economic study of the Electronic Music Industry, covering all aspects of the genre. Today it was delivered directly to the key leaders in the music industry at IMS Ibiza by author Kevin Watson.

The IMS Business Report is the annual leading industry study that provides vital and telling statistics of how the industry has grown or declined each year. The contents and data are used by professionals across the industry, referenced countless times in market research and journalistic reports, and is an essential tool for the electronic music business.

The following report illustrates some shifts in the overall value of the genre with a slight fall by 2% YoY, encouraging statistics and activations for Spotify, how social networks are helping artist to grow their fanbases at extaudianry rates and how investment is remaining positive overall.

Some of the main points that were revealed today included:

Part of this was the crossover of many tracks by electronic djs and artsist into other genres such as pop and R&B.

Plus an adjustment was somewhat expected following recent growth so slight dip was expected.

Dance share of recorded music also fell in Germany & UK in 2017, on the back of significant gains in prior years

Europe is a similar story electronic music share down YoY.

A Nielsen study into music habits in Asia-Pacific found that Koreans are most likely to listen to Dance music.

In Asia recorded music is growing with 74% of the 500 people surveyed saying they listen to Dance Music.

Business valued at $28bn, subs forecast to double by 2020; Electronic music over indexes on the platform.

71 Million people worldwide subscribed and electronic music is at the heart of this streaming platform. The ‘Mint’ playlist greatly influencing this with 6th most popular playlist. The 3rd / 4th most streamed tracks on Spotify also are electronic music related.

Track sales growth almost doubled in 2017 and acquisition of Pulselocker enables launch of new services in 2018/19.

A fresh resurgence from Beatport – with growth of 8pc in Q1 and the introduction of the much anticipated future streaming service.

The estimation of the highest earning djs – this year up to 279 million, most DJs earning more than year before.

DJs are tapping into the rising demand for music merch- andise; global sales grew by 30% between 2014 and 2016.

Role of public votes is changing – RA Poll has ceased, Billboard Dance 100 also uses chart and touring data in its alogorhyms. DJ Mag also gets upward of 1 million votes per year and Billboard doing there own poll which includes chart success and touring.

The growth drivers can be attributed to two elements from Instagram. Instagram is now the focus of djs to increase their fanbase especially with the new activation of Spotify linking directly to Instagram stories.

You can also buy tickets for events from Instagram through eventbrite – this is a huge development and other ticketing platforms could come on board to instagram.

Marshmello has added 2 million Spotify followers within the past 12 months.

A number of emerging DJs & artists are growing their online fanbases on those platforms at even higher rates.

Ultra adding 23 new events around the world making 45 in total.

Ultra operate in the same number of countries that f1 visits and is now one of the few entertainment brands that can deliver large scale events across the globe akin to properties such as formula 1.

Events now attract 124k attendees & 700+ artists a year, who represent over a third of the countries in the world.

In the 5 years to 2017 Boiler Room has grown its audience from 10m to 303m, and nearly tripled average viewing time.

We don't have to be physically at an event to enjoy to enjoy it or take part in it.
Number of events doubled, but what they have delivered in terms of audience growth is phenomenal growing to 30 x the audience to 303 million.

Top 10 locations on BE-AT.TV are from four continents, with Argentina, Germany & Mexico the most popular.

Argentina now being the most popular location to stream events.

Their youtube channel has racked up almost 13 billion views and continues the trend of majors buying electronic music labels.

Funding remains strong for companies focussed on Electronic music, with a number of deals in the past year.

Native Instruments, Mixcloud and Splice have attracted 100 Million US dollars between them.

With the influence of electronic music impacting on many other pop culture muical genres. Not surprise that there has been a bit of an adjustment after such growth. Thinking 5 years ahead what would it be worth.

If Electronic Music maintains share in each segment of the music industry, it could be worth nearly $9bn by 2021.