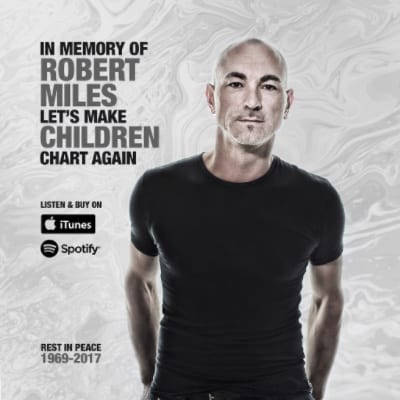 News broke last week of the sad passing of internationally-renowned DJ and producer Robert Miles at the age of 47. In his memory, the electronic music community are teaming up to make his most well known production ‘Children’ chart again – since the news of Robert’s death the track has already started to chart.

Released in 1995, ‘Children’ become synonymous with Ibiza; it reached no. 1 in twelve countries and secured Miles a Brit Award in 1997. Since its release, the timeless piano melody has brought joy to dance floors around the world and continues to be played out to this day. Whilst it was undoubtedly a huge global success, ‘Children’ never reached no1 in the UK singles chart – for it to hit the no1 spot now would be a fitting tribute for the influential producer.

Thousands of people and a wide variety of industry figures have already paid tribute to the Italian artist, with many giving Robert Miles credit for inspiring their careers.

After the release of his debut platinum album ‘Dreamland’ in 1996 – which is beginning to chart again at no9 in the album charts – Robert retreated from the spotlight, but continued to release a string of albums, include 1997’s 23am, 2001’s Organik and Miles_Gurtu in 2004. He was also known for launching OpenLab, a Balearic radio station broadcast from Ibiza covering arts, media and technology.

To join the campaign in Robert’s memory, go to iTunes or Spotify to stream and buy ‘Children (Dream Version)’ and help make it chart again.