Indie rock outfit The Burma have shared their latest single and music video ‘When You’re Gone’ on 24 January via Spooner Records and premiered via Hot Press. The single is taken from their upcoming EP Sugar Moonlight, which will be available on 3  April. The Burma have landed support slots for acts such as The Academic, The Strypes and Delorentos  and have performed at festivals such as Vantastival, Doolin Folk Fest and Whelans Ones to Watch. The band is looking forward to tour dates both in London, UK and nationwide in Ireland. Since the release of their first single, ‘Quicksand’, the band has gained extensive national airplay and have received over ten thousand plays across streaming platforms.

The collaboration of long-time friends Tony O’Donovan (vocals) and Peter Piggott (guitar) as well as Cian Doherty (Doolin, Co. Clare drummer), whom they met in 2012. The Burma released their first single in 2018, after knowing each other for nearly 6 years. Officially named after The Burma Steps in Cobh, Co. Cork, Ireland the entire outfit hails from the surrounding area however each of the band members have strong familial ties to England. They also each come from musical families, whether a simple strong appreciation for the field or having relatives that have worked in the industry themselves.

Accrediting their sound to influences of the American Indie scene of the early 2000’s and British guitar bands of the 80s and 90s, The Burma list artists such as The Killers, The Smiths, Arctic Monkeys and The Strokes as their inspiration. Their own sound sits in close comparison to the renowned workings of Coldplay, Oasis and the vocals of Liam Gallagher.

The black and white live music video doesn’t shy away from opening up with the impressive vocal range of Tony O’Donovan. Striking a melancholic tone and pairing it with heavy distortion tactics ‘When You’re Gone’ radiates with its own associations to the British indie rock music produced in the 90s. The darker-hued lyrical content paired with unflinching honesty and self-expression is balanced with melody and simultaneous balladry

The Burma share the tumultuous journey of creating the music video for ‘When You’re Gone’, “We did the video for this one with Isla Media, our buddies from Cobh. We’ve done a couple of videos with them in the past and we’ve loved them, we have great craic doing them too which helps because it’s usually a really long day. We shot the video in Mill Studios in Dublin, it turned out to be practically the only studio in Ireland that would work for the idea we had. We were giving up hope until the lads eventually found this place and it turned out to be perfect.” 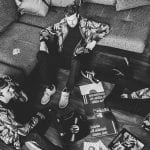