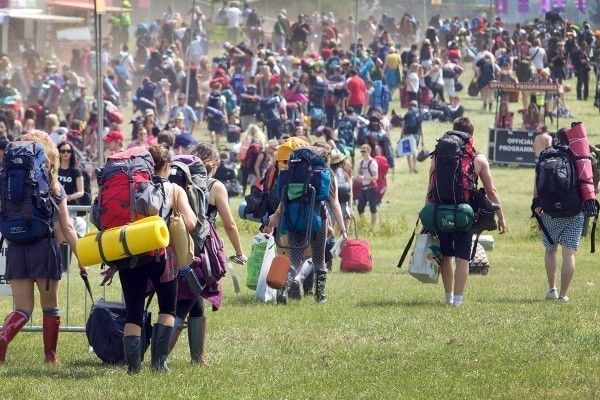 The wait is finally over for T in the Parkers, with the hugely anticipated 20th year celebrations now officially underway. The campsite gates opened at 1.30pm to welcome a record 35,000 Thursday campers to the festival, and the famous campsite roar is echoing around the sunny fields of Kinross to mark the arrival of the weekend of the summer. From Friday to Sunday, an 85,000-strong crowd of campers and day trippers will unite each day for a weekend of incredible live music and a fantastic array of festival entertainment, including performances from headliners Mumford & Sons, Rihanna and The Killers, plus Calvin Harris, Kraftwerk, The Script, Stereophonics Snoop Dogg, David Guetta, Beady Eye, Frank Ocean, Emeli Sandé, alt-J, Foals, The Lumineers, Yeah Yeah Yeahs and loads more.

Festival Director Geoff Ellis was there to open the campsite gates this afternoon, and he gave the first 20 fans to enter the campsite a VIP upgrade in celebration of T in the Park’s 20th year. He said:  “Welcoming the first campers through the gates is my favourite moment of the festival every year. There was a phenomenal atmosphere today, and a great sense of excitement amongst the campers. As it’s our 20th year, we wanted to do something special so giving 20 lucky ticket holders a VIP upgrade seemed like a good idea. The sun is shining, and it’s been a glorious start to our 20th year festivities. We hope everyone has a fantastic weekend, and we can’t wait to celebrate the 20th year of T in the Park with the fans, who truly are the greatest audience in the world.”

George Kyle, Head of Sponsorship, Tennent’s Lager, said:“T in the Park is the best weekend of the year for us, and we’re incredibly proud to have been the T in T in the Park since the very beginning. From all of us at Tennent’s, we hope you all have a brilliant weekend. Here’s to 20 great years.”

Thursday campers will also get the first look at Arcadia’s Afterburner – set to become the hottest after-party destination for festival-goers. A brand new, special addition to the site for the 20th year celebrations, this spectacular fire and light pulsating structure will play host to big name DJs and mixing talent over the weekend including Rudimental, Eats Everything and Claude VonStroke (who will take to the decks in the Afterburner after their T in the Park sets), plus the legendary Lords of Lightning, who bring their jaw-dropping, hair-raising show to Kinross for the first time. They’ll be one of the highlights at Arcadia’s Afterburner throughout the festival weekend, with their unmissable performance which features 4 million volts of raw electricity arcing between 2 men’s brains.

There’s still time for music lovers to get their hands on the final remaining tickets for T in the Park, with a limited allocation of ticket still available (at the time of writing) from www.tinthepark.com and or by calling 08444 999 990. Boutique camping options in The Residence are also available for those looking for luxury living at T in the Park – check out www.theresidenceexperience.co.uk.