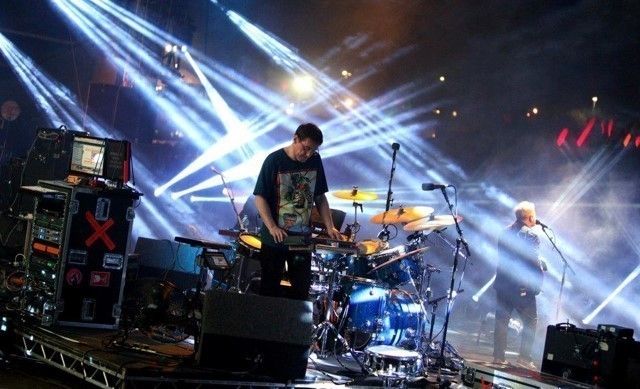 With New Order’s live recording of their amazing set at Bestival last year released this week on Sunday Best Recordings,  the iconic band unveil the video for ‘Temptation’ in celebration.

“Live at Bestival 2012”, a charity CD to support the Isle Of Wight Youth Trust,  is available on CD and digital download. Check out www.sundaybest.net. for retail outlet info.

To quote New Order frontman Bernard Sumner, on stage at Bestival, and speaking to an ecstatic  50,000 strong crowd, “Thank you so much, you’ve been a fantastic audience. Hope you’ve enjoyed it as much as we have. What a great festival, it’s the BEST festival!”

Speaking recently, drummer Stephen Morris continues, “ We played at so many festivals in 2012, and our highlights were, without doubt, the last two in the UK, Portmeirion and Bestival.  Saturday night was fancy-dress night, and Gillian enjoyed dressing up in her peacock head-dress. This charity release is a special way to mark the  Bestival experience,  and we’re thrilled to be working with Rob and Josie’s team to raise money for such a worthy cause on the Island. It’s great to give something back, and also to give such a brilliant crowd something to remember the show by. And if you weren’t there, buy the CD and enjoy the experience that way! ”

Rob da Bank, founder of Bestival says
“As part of our Live From Bestival series we needed to choose an act from 2012 that nailed it for not only us at Bestival HQ and the crowd but also would come across as perfectly on a CD. New Order fit that bill and then some. I was lucky enough to be side of stage for the start of the gig, in the middle of a pogoing crowd for much of the set and then back onstage for the finale. The whole band looked like they were loving it and the crowd was vintage Bestival – appreciative, raucous and dancing like maniacs! Thanks so much to New Order for supporting our charity cause as sales from this recording will really help young people on the Isle Of Wight.”

Eileen Monks, Director of The Isle of Wight Youth Trust, says; “What wonderful news that New Order should choose us, an Island charity of 29 years, to benefit in this way. This came completely out of the blue and at a time when it is becoming extra hard to raise funds to support our work with children and young people on the Island, further cementing our association with young people in their many interests and aspects of their lives. We would like to thank Rob da Bank for his continuing support.”