Jack Trades & Kayrae express the struggles of a bad relationship with New Track “Sideways.” Out on Physical Presents

Jack Trades & Kayrae express the struggles of a bad relationship with New Track “Sideways.” Out on Physical Presents

Canadian producer Jack Trades teams up with singer/songwriter Kayrae for their new single “Sideways,” an emotionally driven dance-pop crossover track that will be your “getting over it” anthem. The single infuses organic, breezy house melodies with chilling vocals, melding into a gently undulating bassline that feels both uplifting and melancholy at once. “Sideways” will resonate with listeners of both electronic and pop music who have ever had a hard time getting over someone. The track was inspired by both Jack and Kayrae’s experiences in past relationships, and the realization that sometimes the most powerful move is to truly let go. The two artists explain more about the meaning behind the new single below:

“Sideways to me is a very special song because Kayrae and I wanted to write something real and relatable in relationships. We all deserve to be happy, and it is important to recognize that and how we should truly learn to let go, if required. The lyrics of the song truly touches on what one is really going through inside but having a hard time expressing it.” – Jack Trades

“This song comes to me from personal experience where I have been in a bad relationship, stuck, not knowing where to go and hoping that one day it will all work out. It was easy during the writing process because everything just flowed and came very naturally.” – Kayrae

Jack Trades made his debut on the scene in 2017 and has since made a name for himself with his brand of easy-listening, melodic dance-pop crossovers. With singles on Thrive, Armada, and official remixes for Adam K & Soha, Dropgun, and Late Night Alumni, Jack has a strong start to what promises to be a very long career. With “Sideways” out now on Physical Presents, stay tuned for more new music from this talented up-and-comer! 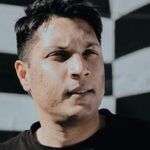