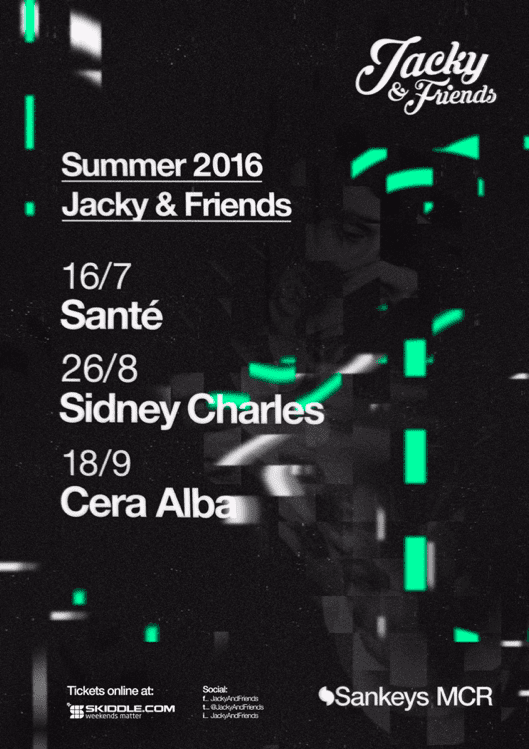 Having already made a name for himself as one of 2016’s biggest breakout artists, Jacky has consistently pushed boundaries with his big room house sound at a succession of top line venues throughout Europe. Adding to the string of huge releases on some of house and techno’s most sought after imprints – including Elrow and Roush – Jacky has firmly cemented himself as an artist to sit up and take note of.

Now, after catching the eye of Sankeys top dogs during his last sell out event at the venue, Jacky is set to launch his first club night ‘Jacky & Friends’ a completely free residency at the Manchester institution. Breaking ground on Saturday 16th July, Jacky launches the series alongside AVOTRE label boss and long term sonic sparring partner Santé, for what is set to be a night of big beats and even bigger vibes.

The following month AVOTRE label regular Sidney Charles makes his way to Manchester on Friday 25th August to join Jacky for a set full of the chunky techno and huge jackin beats that have made the German powerhouse one of the underground’s biggest DJ/producers.

Next up is fellow breakthrough act Cera Alba, who joins Jacky on Sunday 18th September to tear the roof off the old soap factory. Having risen through the ranks of Europe’s underground house scene, Cera Alba has wasted no time in making his mark on the industry and comes as a welcome addition to the Jacky & Friends line up.

With an already stellar line up and three more dates still to be announced, Jacky & Friends is on course to become one of Manchester’s most exciting club nights.