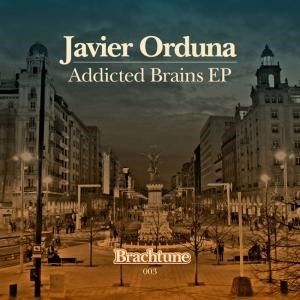 Next up on Visionquest’s heads down off–shoot Brachtune is one of Spain’s finest exports Javier Orduña. Delivering a three tracker displaying his undeniable skill to move a floor, the ‘Addicted Brains EP’ explores a rich electronic spectrum. From deep, driving tech with a ghostly edge in sultry acid trip ‘Acid Speech’ to the bleeps and pumping framework of ‘Addicted Brains’ and bubbling textured synth odyssey ‘Theft At Midnight’, Javier Orduña is a welcome addition to the Brachtune family.

BACKGROUND
Over the past few years, Javier Orduña has become one of the most prolific and respected producers to come out of Spain, now working solo but also known for the projects Retronouveau and Deeps Edayar. Having relocated from Aragon (where Javier cut his teeth as a local resident DJ) to Barcelona in the early 2000s, the Condal City and all its cultural riches hooked Javier into its vibrant emerging electronic scene and before long the budding DJ was involved with the Clear parties held at the mythical Moog club where he shared the decks with the global techno elite.

At Moog, Javier connected with Anthony Madejas (DJ Bruce Lee) and they formed Rebeltech. A duo project of techno and hard techno that had a big impact on the scene at the time, through the Clear residency and later in other venues such as such as Be-Cool, La Terrrazza, Macarena and many more clubs around Spain as well as Flex Club (Vienna–Austria) and Luzztro Club (Warsaw) at an international level.

After passing through numerous decks, Javier felt suddenly inspired to start producing and with determination and endless hours in the studio Javier became the talent he is today – turning his hands at various creative projects such as founding of 2nd Room Records, and the forming of Retronouveau with Hector Herrera. In addition to his most famous project to date (Retronouveau), he has formed other duos such as Deeps Edayar (with Sistema of Bedrock / Traum / Factor City) and Jaw Breder – his new moniker for the deeper stuff.