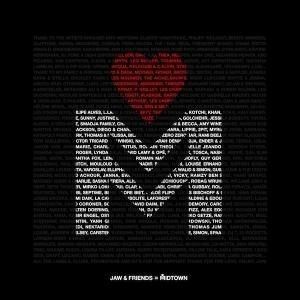 A unique project gathering nineteen tracks from eighteen prolific producers including Claude Vonstroke, Brodinski, Cassius and Art Department centred around one inimitable singer; JAW. ‘Midtown’ is the ambitious sound of an artist reflecting on his vision of the world, through collaborations with friends from every corner of the planet.

You may know JAW by name, but most will know him by voice. As the frontman of French house wildcards dOP and their indie-pop side-project, Les Fils du Calvaire, JAW has blossomed into one of the most distinctive performers in a scene where few dare to cross the barrier of the DJ booth. From bedroom set-ups to street recordings to high-end studios, spanning melancholic folk, electro pop and apocalyptic R&B, ‘Midtown’ is the culmination of years JAW has spent connecting with like-minded artists, challenging himself to use his unmistakable voice in different ways. Placing the emphasis on having fun, whether the music be dark and obtuse, or upbeat and flamboyant, the result is nineteen different recording spaces with nineteen different textures, ensuring that no two moments on ‘Midtown’ feel the same.

As the vocalist for madcap house wayfarers dOP, Jonathan Illel has seduced the hearts and minds of dancefloor dwellers, holding them captive with his voice as he douses them in vodka. He has also guested on notorious tracks such as Claude VonStroke ‘Le Fantôme’ and on his relentless mission to share his voice, he seizes any chance he can to get into a session with anyone who shares his passion.

From selling popcorn at Euro Disney to manning a sex shop, grafting in a kitchen to fronting a hotel reception, JAW has served his time in unforgiving jobs and unsociable hours. So when a fearsome touring schedule first emerged in 2007, JAW relished the opportunity to hone his skills and pushed naturally to work hard.

With ‘Midtown’ he intends to make the perfect introductory statement, identifying himself in every shade of music and to give listeners the full picture. Forcing producers to go outside their comfort zone to meet his musical vision, whilst adopting a unique singing style for each track, JAW has sought to craft the ultimate collection of music to represent who he is. The digital version collate five extra track collaborations.

It’s an open move, laying his soul bare before he moves on to explore more mysterious ways of making music, but JAW is on a constant mission to take in human contact. His website, an online collection of his photographs from around the world, is addressed with a phone number, positively inviting the world to call up for a chat. www.0033669988858.com

It’s this affinity for making connections that makes JAW such a good story-teller, fuelling his imagination and leading him astray, and like the pied piper when he starts singing we can’t help but follow.