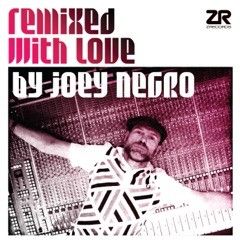 Joey Negro is the most well-known pseudonym of master British DJ/producer/remixer Dave Lee. Under a plethora of other monikers including Jakatta, Akabu, Doug Willis, Raven Maize, The Sunburst Band, Sessomatto, and Z Factor, Dave was one of the first artists to incorporate disco samples in house music when he began his production career in 1988.

Intrinsically linked with the birth of Soulful house in the UK, Dave Lee set up the dance music division of Rough Trade. His discography is undoubtedly as impressive as his knowledge of seminal house and disco, and now Joey/Dave puts it to good use with this album; a revisit to some of disco’s most sparkly moments.

Turning this dream project into a reality was a labour of love. It turns out getting original session tapes from tracks 30 years old is as, Joey puts it “A headache”.

“Often you end up speaking to relatives of the person who actually made the record and unfortunately I heard the line all too often, “I might have a copy of the vinyl somewhere but I definitely don’t know where the master tapes are.”

As a fanatical music collector and enthusiast Joey found himself meeting up with ex-label reps and relatives of the artists leaving no stone unturned – searching through boxes and in lofts. One multitrack was even under the producer’s bed. With such dedication comes results and the result is impressive.

Rather than remixes in their modern definition this is a body of re-edits with the tracks given a new dimension to make them relevant and playable now. In many cases he has changed the drums, added percussion and sometimes keyboard parts but not totally ditched the music and started again as is often the way with straight up house remixes. This project is about utilising some of those fantastic original parts in a different way hat takes advantage of many of the songs classic status subtly teasing in familiar elements and dubbing them out.