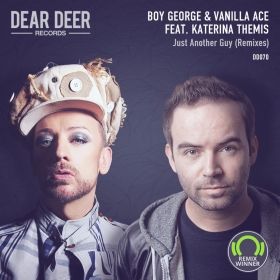 Dear Deer Records proud to present remix contest result from their first and one and only Beatport Play remix competition. Dear Deer Records gathers a really up-scale artists for their 61st release a single ‘Just Another Guy’ from Sam Young and Boy George witch one was released few month ago.

Sam is known well on European club scene as Vanilla Ace. Since 2012he put out many successful releases on Toolroom, OFF, Bunny Tiger, Sleazy G and more.

Boy George hardly requires a special presentation. The wide audience knowns him as a frontman of famous ’80s group Culture Club. To the dance music community he’s an outstanding DJ and producer, who put out a lot of club hits and mixes together with Phunk Investigation, Judge Jules and Pete Tong.

To the work on a single Boy invited London-based singer and a model Katerina Themis, the daughter of famous composer John Themis who worked with George Michael, Dido and Rod Stewart.

We are pleased to present you winners from 281 remixes we are choose beautiful house remix from Ukrainian Duo Mooncut & Soultonique. Also release include support remixes from Climbers, Ben Remember, Dan McKie. Enjoy!