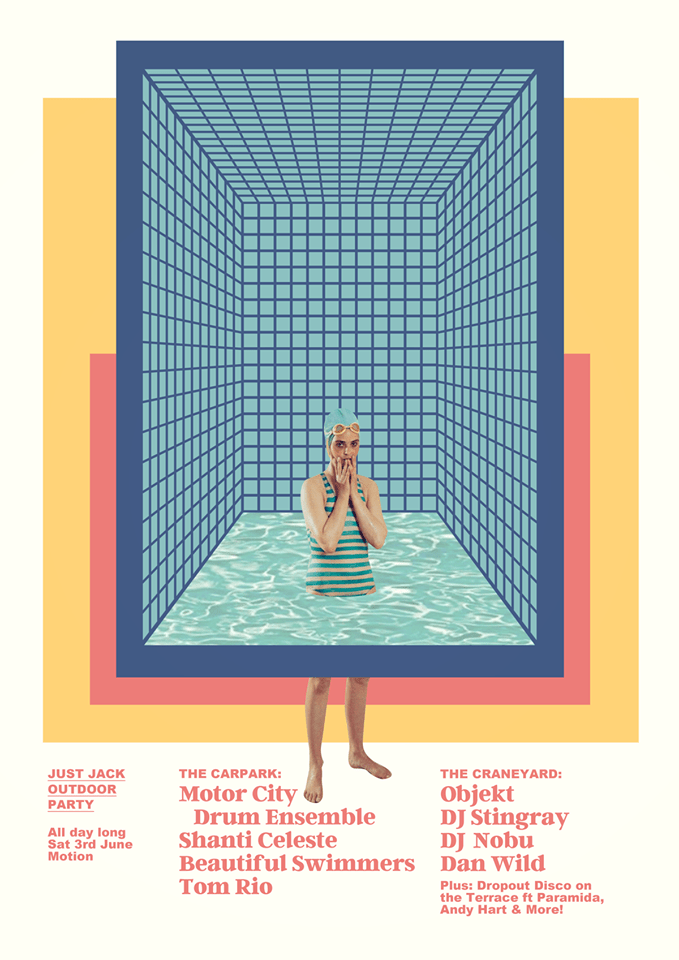 Summer will well and truly be here with the arrival of Just Jack's Summer Party on Saturday 3rd June.A week after their Love Saves The Day takeover, Just Jack will be returning to the carpark and craneyard of Motion for an all day outdoor vibe-a-thon!

Last time Just Jack took over Motions expansive outdoor spaces, was one of their all-time favourite parties, and with the lineup they have in store this year, this one looks set to be even better.

All the fun of frolicking in a field but without the mud… it's literally a win-win situation and anyone who's seen the outside of Motion in full swing will know what to expect, the place was literally made to host parties like this.

Topping the bill is Motor City Drum Ensemble. A firm favourite amongst dance music fans, MCDE spins a bountiful mix of house, funk and disco. An infamous crate digger for disco rarities, many of his selections become instant classics off the back of his shows.

Joining MCDE, is Berlin based DJ and producer Shanti Celeste. After a fantastic year of record releases and the recent launch of label Peach Discs, expect a genre spanning set that will surely bring the sunshine down to Bristol. Infamous party starters Beautiful Swimmers are also set to play. Known for their masterful selections and ear-to-ear smiles, the pair are destined to bring the crowds to the dance floor, themselves included.

Elsewhere, nestled between the old warehouse loading cranes, Motion's Craneyard will be the perfect industrial setting for an afternoon of techno. Detroit legend DJ Stingray will take to the decks, with 30 years of DJ experience under his belt, expect plenty of electro and hard-hitting techno from this masked dancefloor controller.

After the success of Soichi Terada's set at the recent 11th birthday, Just Jack bring his Japanese compatriot DJ Nobu to Motion. His reputation as a selector has seen him play sets across the globe, and his set at the Summer Party will not be one to miss. Berlin based Objekt returns to Motion after his thrilling Just Jack set last year, we can't wait to see what gems he brings this time around.

Just Jack residents Tom Rio and Dan Wild will also be on hand, whilst Dropout Disco will be hosting the Motion Terrace with sets from Berlin mainstay Paramida and Andy Hart.

Do not miss this!

Pre-registration for tickets to Just Jack's All Day Partaaay is open now via http://justjack.eventgenius.co.uk with tickets on general sale Wednesday 8th March.