Kaiser Chiefs and much more to Rock in 2014! 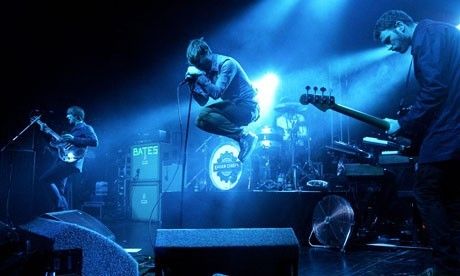 Kaiser Chiefs and much more to Rock in 2014!

Rocks favourites Kaiser Chiefs are set to return to the Balearics this summer for another set of storming gigs under the stars, headlining the famous poolside stage at Mallorca Rocks (02/09) and Ibiza Rocks (03/09).

Ibiza Rocks first booked Kaiser Chiefs way back in 2005 for one of the first ever Ibiza Rocks gigs, when they were on the cusp of stardom before the explosion of their debut album, Employment.

With follow-up shows at Rocks in 2007 and 2012, the Leeds-based quintet are back and ready to hit the island stages once more, fresh off the back of the release of their fifth album, Education, Education, Education & War, which hit the coveted number one spot in the UK charts. Performing at both Mallorca and Ibiza Rocks in September, the shows are set to be the band’s most energetic and best yet with a set list jam-packed with smash hits and new material.

Rocks prides itself on nurturing the musical stars of the future as well as booking a hot line-up of established headline acts, and this year is no exception. New additions to this summer’s support slots includes solo talent Bipolar Sunshine, who will warm up the crowd before Lily Allen’s debut performance on 24th and 25th June, and Welsh indie rockers Catfish & The Bottlemen, who will hit the stage before Jake Bugg’s latest Rocks headline shows on 15th and 16th July.

Canadian singer Kiesza, who is currently riding high in the UK singles chart after hitting the number one spot with her debut single Hideaway, will support Rudimental on 29th and 30th July, plus headliners Bastille will be supported by blues solo performer Rag ‘N’ Bone Man on 5th and 6th August.

Held every Wednesday from 4th June to 17th September, Rock Nights at Ibiza Rocks House will see a host of international DJs including Silvia Superstar, Fuck & Destroy, Jeff Automatic and Rock Nights resident Colin Peters hit the decks in both the main room, “Freddie’s”, and the smaller “Chez Fez” music space. Music aside, the Rock Nights parties will also offer guests karaoke sessions in Freddie’s famous ball-filled bathtub, snaps in the customised photobooth, fun in the album sleeve faces corner and a turn on the crazy piano, as well as a browse of the rails in the vintage clothing showrooms and the chance to get inked in Ibiza with the resident tattooist. Guests staying at Ibiza Rocks House at Pikes will automatically be on the guest list and other revellers can apply for guest list by contacting Ibiza Rocks House at Pikes.

MTV will be the exclusive broadcast partner for the second year running. The network will broadcast a number of live performances, exclusive artist interviews and all the highlights from the 16-week long series from the Ibiza Rocks and Mallorca Rocks Hotels this summer. Seven shows will be broadcast in total on MTV Live HD and the network’s flagship channel MTV Music including 5 x 30’ shows from Ibiza Rocks and a 1 x 30’ show from Mallorca Rocks as well as a 1 x 60’ (multi-artist) compilation show incorporating live track selection and exclusive interviews.

4 nights accommodation At Mallorca Rocks* including tickets to see Kaiser Chiefs, and 2manydjs and Friend Within from just £93 per person. Return flights from £95 per person
*Based on 4 sharing a Standard Apartment in the Mallroca Rocks Apartments and return flights from STN