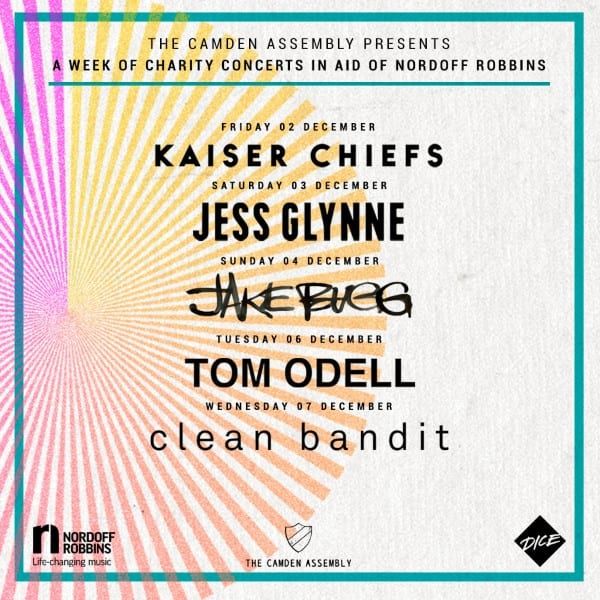 Teaming up with ticketing app DICE, The Camden Assembly is set to host a charity ticket lottery for a week of unforgettable shows this December. Music fans will have the opportunity to see some of the UK’s biggest names whilst raising money for music therapy charity Nordoff Robbins.

London’s newest home for music, The Camden Assembly launched this September with an impressive programme of nightly live music from the best in emerging and established talent. Becoming the second live venue to open in the space of months – following the Jazz Café’s re-launch in May – The Camden Assembly has seen the area moving to rediscover its rightful place as a hot-bed for independent musicians and creative thinkers.

With a month of packed-out shows behind them, the team – who also run XOYO, Phonox, The Jazz Café and Sunfall festival – are setting their sights on the venue’s next big statement of intent. Partnering with DICE, the mobile ticketing app that curates events across London and sells tickets without a booking fee, they’ll be offering music fans the chance to see stadium worthy acts within the intimate walls of their 200 capacity venue.

Tickets will be made available via a lottery hosted on the DICE app, the proceeds of each £2 entry being donated to music therapy charity Nordoff Robbins. Nordoff Robbins is the largest independent music therapy charity in the UK, dedicated to changing the lives of vulnerable and isolated people. Supporting thousands of people in their own centres and by working in partnership with a wide range of organisations including care homes, schools and hospitals.

Tickets will go on sale on Monday 31st October via DICE – users can sign up and register their interest in the events from Monday 24th October onwards in order to ensure they’ll be the first to know once the tickets become available.

Any further information on how to enter the lottery will be released via the Camden Assembly socials.

DICE gives fans access to the best gigs, club nights, and festivals with no booking fees. Launched in the UK in 2014, DICE was named Best Of 2015 by Apple and won Best Ticketing Company at the 2016 Music Week Awards.