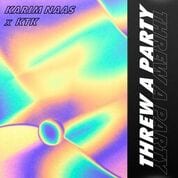 20-year-old super producer and DJ Karim Naas releases the infectious and euphoric Threw a Party. Coming off the back of a busy 2019, with an already stellar repertoire of songs, Naas is set to kick off 2020 in style with his latest offering.

Listening to the track it’s clear to see why Naas is such a popular producer. Pop piano chords bring in the upbeat and melodic verse, sung by the talented KTK. Interesting percussion and production arpeggios accompany the lyrics, before the catchy build-up chorus enters in with brief jazz chords in the piano. As Naas masterfully adds in instruments to build the tension to the drop, he includes an extra bar to hit the listener with a memorable classic hook, “Tonight I threw a party”. When the song drops, in comes a powerful distorted brass with bass, which acts as the melody for the chorus, giving it bounce. Naas uses interesting flanger effects to mimic the crowd at his party, which is the kind of little detail that sets apart the great songs from the good. As the song progresses, the repetition of its killer hook parks it firmly in the listener’s mind and will have your subconscious humming it for days to come.

With this song Naas brings his take on a classic pop formula, giving it drive and interest right up to the last second. As the first song to be released under his own name, Karim Naas has had much success with multiple recordings to his credit. After winning both a Soonvibes contest and a Bob Sinclar remix competition at just 16 years old, he went on to release multiple singles including an official remix of ‘Mi Gente,’ which garnered huge amounts of streaming attention and millions of plays. Now ready to take the world by storm, 2020 is set to be a huge year for Naas. With multiple releases planned for the coming months, Naas signals his intent for the year with Threw a Party. 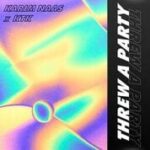