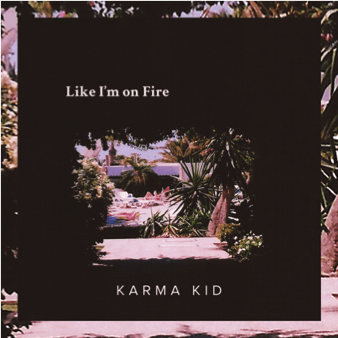 Derbyshire’s very own Karma Kid has been steadily honing his sound with whatever-he-touches-turns-to-gold streak. Next in line is his debut EP for burgeoning Parisian label Roche Musique who have recently released the likes of FKJ and Kartell. ‘Like I’m On Fire’ is released on 2nd February.

Two track EP ‘Like I’m On Fire’ is Karma Kid AKA Sam Knowles through and through. Featuring his vocals on both tracks, ‘Between Sheets’ marries a sexual, sensual side to R&B flecks of smoothness whilst ‘Like I’m On Fire’ ups the tempo on the flip, proving Sam knows his craft inside out and then some.

19 year-old Karma Kid first entered the scene in 2012 with his track ‘It’s Always’ which proved a huge favourite at Radio 1. It was Nick Grimshaw and Sarah Jane Crawford’s records of the week on BBC Radio 1 and BBC Radio 1xtra respectively and garnered support across the board from the likes of Annie Mac, Mistajam, Monki, B Traits and more. Furthermore, Annie Mac has given Karma Kid her own heady stamp of approval, leading to him frequently touring with the ‘Annie Mac Presents’ night across the UK.

Last single ‘In My Arms’ was named XLR8R’s top download of 2013 and his most recent collaboration with Friend Within and Yasmin as part of BBC Radio 1 Monki’s Red Bull project was named Disclosure’s favourite summer club record.

Summer 2013 saw him performing at some of the most well-known music festivals and venues around Europe including Bestival to Reading and his debut in Ibiza and La Machine, Paris. Towards the end of last year, Karma Kid supported Bondax on their national UK tour and played on the London Eye for Red Bull’s Revolutions in Sound, one the year’s biggest moments in the last decade for club music.

Picking up many accolades throughout 2013, and having penned unheard music with some of most exciting acts of the moment, including Andreya Triana (Ninja Tune), Ryan Ashley (PMR) and Becky Hill, Karma Kid is staking his claim to be 2014’s breakthrough producer.