Kazi A Teams Up With Lady P On New Single ‘Villain’

Kazi A Teams Up With Lady P On New Single ‘Villain’

Two of the freshest emcees to come out of Western Sydney Kazi A and Lady P joined forces on their new powerful single ‘Villain,’ accompanied by captivating visuals from Jackson Speed.

A raw and motivational single, ‘Villain’ depicts how real energy can be conveyed without swearing or using derogatory terms. The two artists’ effortlessly showcase their authenticity within this track in their lyricism and demeanour.

On how the two got together, Kazi A said, “Lady P opened for my ‘Trappelation’ album. I was captured by her energy and skills as an emcee and I just knew I had to collaborate with her,”

“I don’t just collaborate with anyone. Villain was the name of the beat and Lady P and I chose that one knowingly that it would suit both parties. We encouraged each other to keep it classy with high energy and still made it sound gangster,”

Using their voices and platform to make a difference, individually the artists’ have created a lane of their own, together they’ve built a unique style and flair not to be missed.

With an impressive back catalogue, Kazi A returns with this new single after a trail-blazing album release. Taking on the scene in a serious way, he continues to captures his audiences with the art of story telling through rap and poetry.

Having peppered music over the last years, Kazi has been in the hip hop scene since 2000s’. Born in Bangladesh Kazi was raised by his grandmother. With a unique upbringing, the rapper started writing at the age of 14-years-old and his biggest inspirations are the greatest Tupac, Bone Thugs N Harmony, NWA and Immortal Technique. 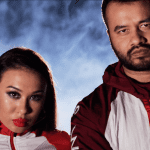