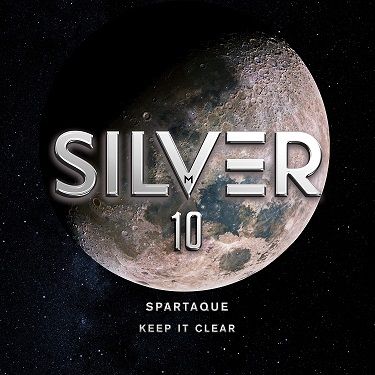 Silver M was created in 2016 by Spain’s much-loved and established techno DJ/producer/entrepreneur Fatima Hajji to spread her personal conception of sound within the growing techno scene. Within a short space of time the label (and events brand) has gone from strength-to-strength, boasting releases by some of the scene’s finest talents such as; D-Unity, Drumcomplex, Loco & Jam,  Fabio Neural, Frankyeffe, WANB, Dani Sbert, and, of course, Hajji herself amongst others.

Spartaque’s impressive 3-track EP is a great addition to Silver M’s release roster and follows his previous outings on labels such as; Tronic, 1605, Phobic, Toolroom and Respekt Recordings to name just a few.

Kicking things off is the EP’s title track ‘Keep It Clear’, which delivers a heavy dose of no nonsense techno encompassing; a pounding 4/4 beat, twisted synth textures and a superb use of effects. ‘Saturn Ring’ is next up and provides another intense dancefloor workout, comprising of; a dark and manipulated looped-up vocal sample, warped melodic elements and powerful bass frequencies.

Concluding the EP in style is the peak-time banger ‘Avoid’, which perfectly complements its forerunners and serves up a heady mix of ferocious techno stabs, intense builds and eerie sound effects to great effect.

Spartaque Keep It Clear EP is available exclusively via Beatport from 12th March and everywhere else two weeks later.