Ripstar & Nyanda feat. Pitbull - Keep Me Up All Night 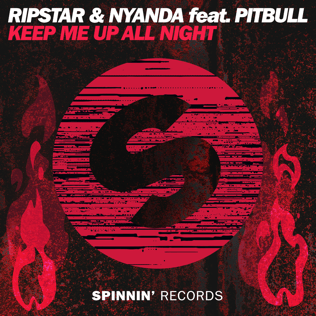 Ripstar & Nyanda feat. Pitbull - Keep Me Up All Night

Please welcome brand new project Ripstar, teaming up with Jamaican singer Nyanda and US rapper Pitbull, with their most exciting debut single 'Keep Me Up All Night', officially out now through Spinnin' Records.

Ripstar was recently launched as a special project by Stephen Singer (aka Lotus) and Rico Bernasconi. The duo quickly caught up with vocalist Nyanda, known as one half of famed Jamaican duo Brick & Lace, to lay down the exciting pop/dance gem 'Keep Me Up All Night'.

Already a mesmerizing tune by its own standards, blending the genres of contemporary pop, dance music and elements of Jamaican spirits, the record got fired up even more with adding a feature of worldwide hiphop celebrity Pitbull. Turning 'Keep Me Up All Night' into a destined party favorite, made to conquer both the gritty dancehall club floors as radio waves all over the globe.

Stephen Singer quote: "With 'Keep Me Up All Night', the production came about after a meeting of creativity, combining musical forces of Rico Bernasconi, Nyanda and myself. I approached Nyanda to make this project along with adding a feature of Pitbull, and brought in Rico to help create the final piece of the musical puzzle. Out of the musical oven came a delicious combination of pop, dance and a bit of Jamaican touch, called 'Keep Me All Night'. It is the perfect kickoff for Ripstar, a most promising music project we are happy to launch!"

Ripstar & Nyanda feat. Pitbull – ‘Keep Me Up All Night’ – Out now on Spinnin' Records
https://spinnin.lnk.to/KeepMeUpAllNight