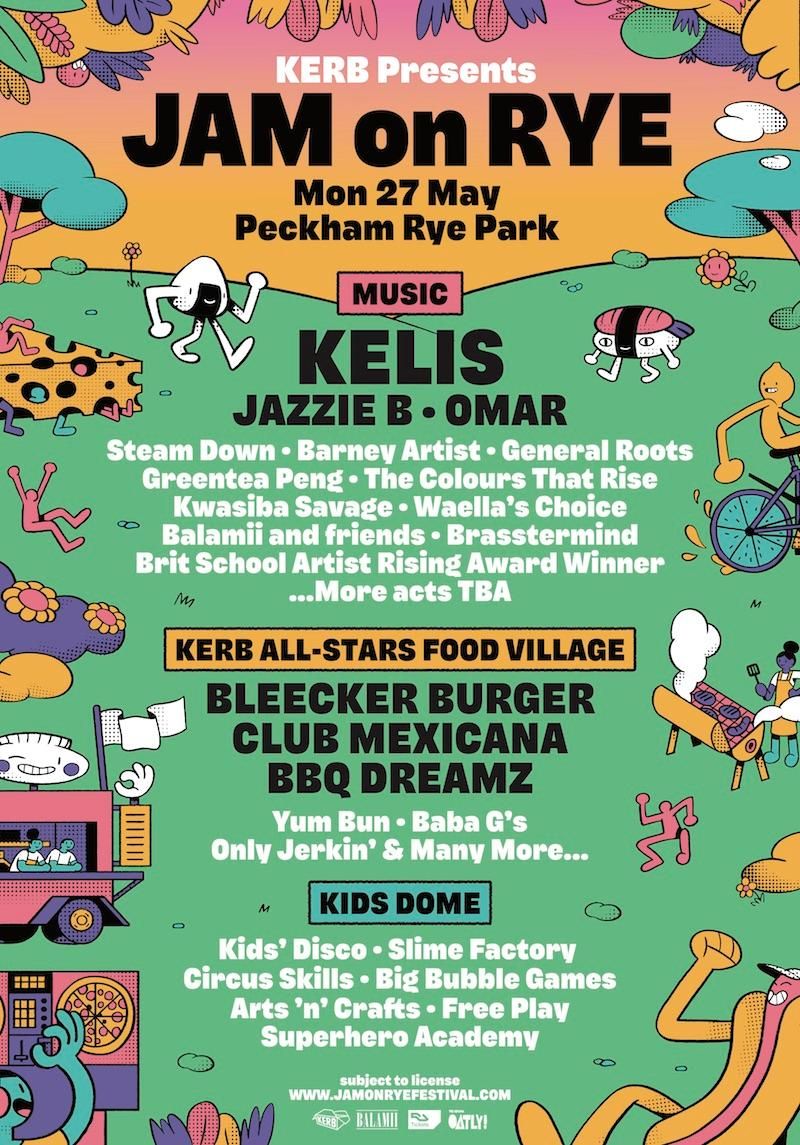 Jam On Rye will be bringing the world renowned superstar Kelis to Peckham her first UK festival performance of 2019. The queen of RnB will be headlining the festival, performing her numerous international hits such as Milkshake, Trick Me and Millionaire in what is sure to be a show of carnival-esque proportions.

She'll be joined by none other than founder of Soul 2 Soul and musical legend Jazzie B. Awarded an OBE for services to music in 2008 Jazzie has a well earned legacy of being one of the most respected musicians in the business, and his performance at Jam On Rye will be one to remember. Also playing will be soul legend Omar, who having collaborated with the likes of Stevie Wonder and Carleen Anderson, not to mention also receiving an MBE for services to music fits right in to the star studded line up.

Local online radio Balamii will be hosting a stage showcasing local talent, sticking to Jam On Rye's mission statement of supporting homegrown talent in the area. Also in keeping with this they have partnered with The Brit School – the performing arts college will put a selection of their rising stars on a stage in Tulse hill on the final Thursday of every month until May with the overall winner being awarded a slot at the festival.

Jam On Rye isn't just about the music, they will also be bringing the absolute cream of street food to Peckham Rye, hosting the most diverse food line up to be seen in London this year. Bleeker Burger – voted best burger London – will be bringing their van to their first festival of 2019 leading the food charge alongside the likes of Club Mexicana, voted best street food in London by Time Out, BBQ Dreamz and Baba G's who both won the BBC's Million Pound Menu.

Only Jerkin' – the nationwide success story and one of KERB's top traders will be bringing their inimitable Caribbean flavours to Jam On Rye's BBQ Pit. They'll be joined by Carcass and their incredible steak and ribs, as well as the smokey sweet flavours of London Smokehouse among others.

Jam On Rye will also be supporting local traders with Deserted Cactus, Garden Of Eden and Bokit'La,all set to attend not to mention a plethora of other traders – enough to whet the most die-hard foodies appetite.

Families are also welcomed at Jam On Rye, with this years festival offering an endless programme of activities for kids to enjoy, not to mention a playground situated inside a whole dome, with activities such as the messy 'slime factory' to keep the young ones entertained.

Created for the communities of Peckham and South London, Jam on Rye will be working with local music, food, charity and craft organisations at every opportunity. From music fans hungry to discover new sounds, food fans keen to make the tastebuds tingle and families looking for a fun day out with plenty of activities for the kids to enjoy, Jam on Rye has something for everyone.

Brought to you by KERB – an organisation that specialises in incubating and accelerating food businesses – who's vision will filter down for the curation of Jam On Rye's second year; providing a platform to showcase and develop new talent, providing a space that nurtures creativity in all forms.

Organisers will also be looking after the environment with 100% of food traders using compostable containers and committed to cutting out single use plastics as well as reusable cups and recycling. KERB also support homeless charity First Love Foundation.

Tickets for Jam on Rye 2019 are available now at www.jamonryefestival.com