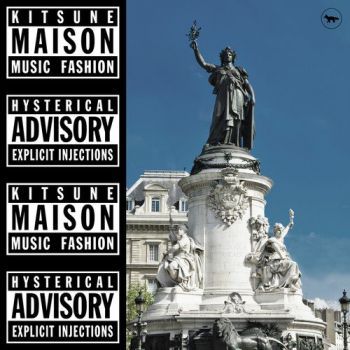 New vibes. New cover. Kitsuné is taking a brand new look at its Maison Compilation series with the release of Kitsuné Maison 18: The Hysterical Advisory Issue on November 18th 2016. The 18th edition of the Parisian label’s flagship compilation is opening up new perspectives with a rigorous selection of chill and funky hip hop and future R&B. Everything that taste making blogs can’t get enough of. The label has always taken to heart its music curation as much as its image, a key driver to its success. It only makes sense to invite a distinguished guest to design the cover: no less than Cali Thornhill DeWitt, who worked on Kanye West’s latest clothing collection inspired by his album “The Life of Pablo”.

“Kitsuné Maison 18: The Hysterical Advisory Issue” is a clear and playful nod to the underground hip hop culture. While the Parisian label is perpetually exploring landmark genres that shape the music of tomorrow, this new chapter, Hysterical Advisory, clearly outlines the future of Kitsuné. Let up-and-coming artists from all around the globe take you on the ride. From the Midwest hip hop vibes to electro acoustic trap, Kitsuné Maison 18 never stops surprising you.