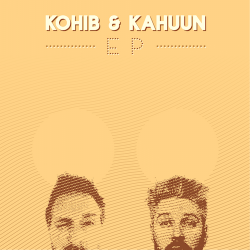 Bergen-Tromsø house alliance! Two beardy and nice chaps have put their heads together to collaborate, but not as a duo as one would expect. Instead Norwegian producers Kohib and Kahuun have provided a track each, and then have remixed each other’s respective track.

Kahuun is a part of the electronic scene in Bergen. He released his debut EP in 1999 on Paper Recordings, and has released a string of EPs on various labels. His early tracks were in a jazzy broken-beat style, but lately he’s been leaning more towards four-on-the-floor house and techno. His contribution – “Superduplex” – is a wonderfully sprawling electronic composition that builds and builds with creeping layers of melody and percussion.

Kohib is an important part of the Tromsø electronic music scene, equally as a club organizer, DJ, and producer. His debut was on the Prima Norsk 3 compilation in 2005, followed by an album, a remix-album, and a string of highly regarded EPs and digital singles. “Dynamo Rex” is a prime example of Norwegian techno in Kohib’s inimitable style. Filtered synths, motional rhythms, metallic percussion, and hypnotic patterns all give this track a trippy, late night quality.

The exchanged remixes show Kohib and Kahuun applying their individual production techniques to each other in an engaging manner. Kohib lends his icy precision and uncanny ear for melody on his remix, while Kahuun adds his rhythmic intricacies and knack for a mesmerizing, long, effective build. Together they’ve delivered an EP that is both unique and noteworthy, and a fine addition to the catalogs of the artists and the always dependable Beatservice Records.