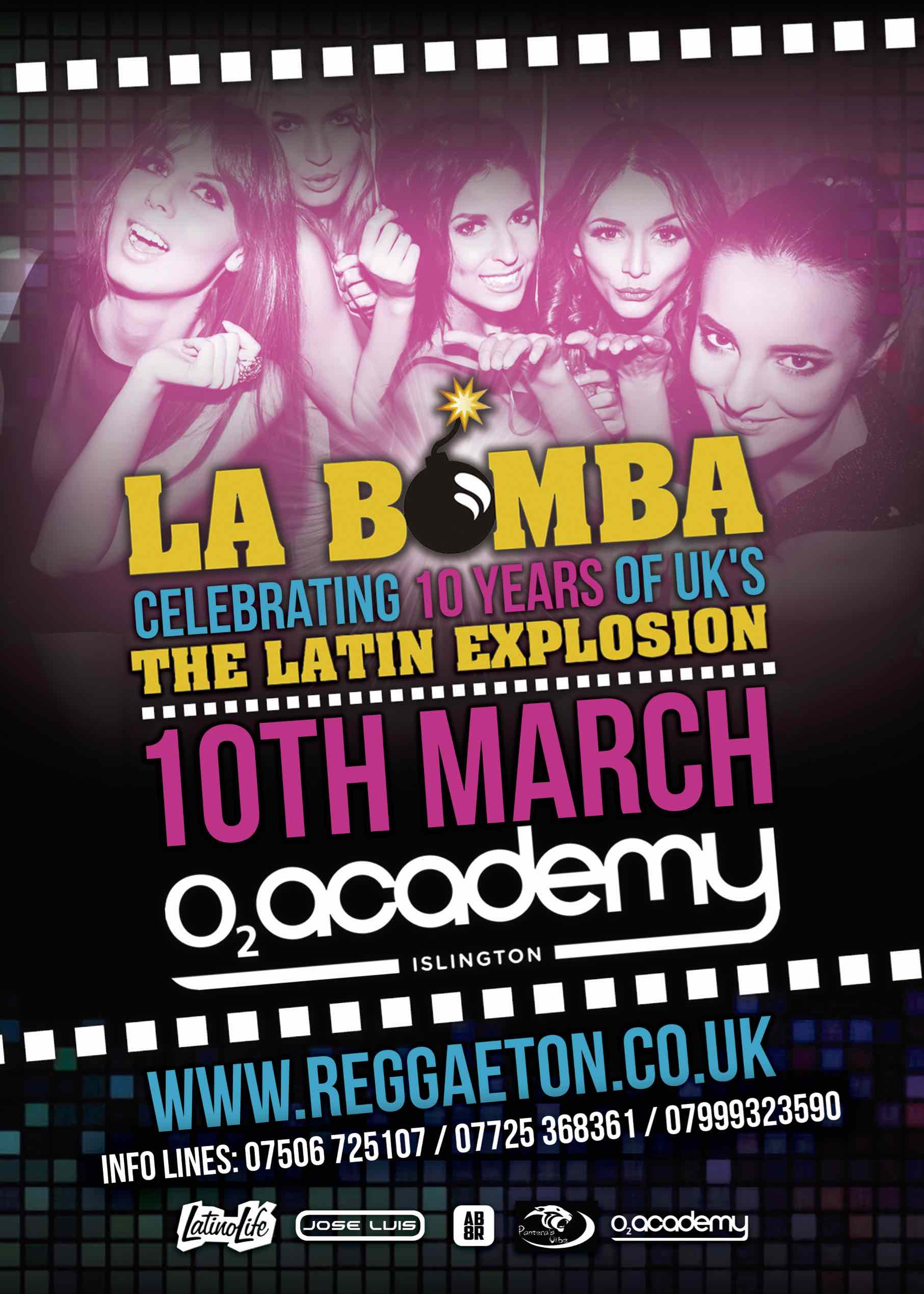 After al hiatus, Europe’s pioneering Reggaetón/Urban Latin rave La Bomba, returns to the O2 Islington Academy to celebrate its milestone 10th Anniversary re-launching a series of one-off mega jams.. Having rocked Pacha in Ibiza and London’s world famous Ministry Of Sound, the team pull out all the stops and line up 10 of the scene’s favourite DJs plus a Special Live show from London’s Colombian duo, Jay P & Olimac firing festivities up to celebrate the original cutting edge vibe and party atmosphere.

Original La Bomba DJ dons Jose Luis, Padrino, Saul Maya and DJ Chino take on London's new generation of selectors Luigi Sanchez, Pedro Suave, Carlos Ortiz, Kevin Gato, C Fuego and J Andres in a battle of the Old School vs New School as they re-define the the next generation sounds of  La Bomba. Helping blow out the candles and pulling out all the strops are Colombian-born, London-based Reggaetón duo,  Jay P & Olimac, rousing the crowd with their explosive live show.

n 2007 after pioneering a series of events across the capital, DJ Jose Luis & the La Bomba promoters were invited to stage their cross-over Latin rave at a large scale venue, starting in what was then the Hammersmith Palais and moving a few months later to Ministry Of Sound. Holding  a residency at MOS for 8 years as well as residencies at Pacha (Ibiza and London), The Honey Club and TBC (Brighton), SE One, Scala, Plan B and others venues across Europe, La Bomba enjoyed an unprecedented run and was hailed as the ‘No 1 Latin club night’ at the time.

La Bomba helped break the now global phenomenon of Reggaetón in the UK, being the first club night to play and host artists such as Daddy Yankee, Don Omar, Wisin & Yandel and Pitbull. Ten years later Reggaetón has established itself as a mainstream force within the music industry, infusing some of 2017s most successful global pop anthems with its hypnotic beat, in part thanks to producers such as Major Lazer and DJ Snake. New Latino artists such as J Balvin, Maluma, Farruko, Gente de Zona and the pioneer Nicky Jam have reached worldwide fame, on the back of this uniquely Latin rhythm.

Reggaeton has also had its influence on a new Latin London generation, and the next La Bomba will witness some of of the city’s hottest mix talents jamming the party alongside the original DJ squad.

Get ready to dance your ass off with a friendly dance crowd that appreciate some of the finest latin and urban music that the capital has to offer in an unrestrained party atmosphere. Bearing all this in mind, please get your tickets early to avoid disappointment, and Early Birds are only £10.00 and see you on the dance floor!!

OVER 18 ONLY. Compulsory ID and search at the door