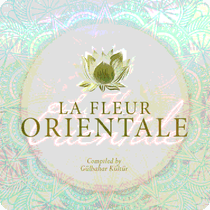 It is a collection of tender, mesmerising melodies and hot oriental rhythms tastefully selected by the renowned music curator DJ Gülbahar Kültür; a ride gliding in a dynamic flow to expand the boundaries of inspiration, where western sounds meet the rich tradition of oriental music and create an east-west divan of 17 outstanding musical pieces.

Coming up with a totally new chapter of her successful compilation series DJ Gülbahar Kültür’s choice of eclectic music does an incredible job in creating an ambiance both to unwind and to knock the dust of the dancefloor in the same album: beginning with wanderings in sun-drenched comfort zone beats for audio aesthetes, the album progressively evolves into a festive dance fireball burning up with oriental passion.

DJ Gülbahar Kültür: a producer who never ceases to immerse herself in new experiments to constantly rediscover cultural expressions in music… Her latest work LE FLEUR ORIENTALES is a refined, charming blend that reflects the current pulse of music, where east and west nourish each other for a fascinating musical session.