Shaun Frank ft. Ashe - Let You Get Away 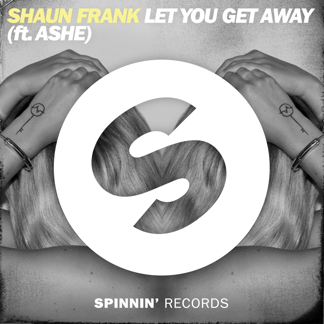 Shaun Frank ft. Ashe - Let You Get Away

Canadian dance notoriety Shaun Frank has released his much awaited new single 'Let You Get Away'. Featuring US singer Ashe it's a track already supported by a wide range of DJs, out now on Spinnin' Records.

Shaun Frank has been making serious waves recently, working up quite a discography as singer/DJ/producer. Last year alone, the Canadian multi talent delivered major club hits like 'Shades Of Grey' (alongside Oliver Heldens) and 'Heaven' (working with KSHMR), while he recently co-wrote The Chainsmokers' worldwide hit 'Closer'.

Now he returns on solo productional duty, teaming up with San Diego singer Ashe for the first time, immediately turning up with a undeniable gem. 'Let You Go Away' works up stylish pop vibes along with exciting, synth based dance rhythms, touching both body and mind with its chords and vocal lines.

Ashe remembers vividly how 'Let You Get Away' was conceived during a writing trip to Toronto. "It was the first time Shaun and I had ever met, but after a couple minutes of throwing ideas around and chugging coffee, we become close friends. LYGA started with the melody that you hear out the gate, it's the very first melody that came out of my mouth when I heard the chords. I could tell Shaun was into it cause it wasn't a second later that he put words to my notes, 'every time you screw up I will find an excuse to forgive you' and we were off! When we left the studio that day I remember feeling like we had a really solid song and altogether, I left Toronto going, 'damn, everything is about to change.'"

'Let You Get Away' has seen DJ support from the likes of The Chainsmokers, R3hab, Dillon Francis, Jay Hardway, Ummet Ozcan, Lucas & Steve, Felix Jaehn, Lost Frequencies, Audio Bullys and many more.

Shaun Frank – ‘Let You Get Away’ feat. Ashe – Out now on Spinnin' Records
https://shaunfrank.lnk.to/LetYouGetAwayftAshe