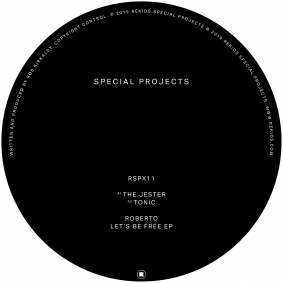 Radio Slave welcomes UK techno talent Roberto to Rekids to deliver the latest installment in the ‘Special Projects’ series as he opens 2019 with his ‘Let’s Be Free’ EP.

Based in London, Roberto aka Rob Kirkaldy is one of the latest names of note to emerge from the capital’s ever-impressing electronic music scene having showcased his rich blend of deep and immersing techno via a host of esteemed imprints including ARTS, Fachwerk and his own label Fossil Archive, founded in 2015, in recent years. Following a string of performances across revered establishments including fabric, Tresor, Culture Box and Berghain, 2019 will open with a debut outing on Radio Slave’s Rekids imprint as he delivers four entrancing techno cuts in the form of his ‘Let’s Be Free’ EP, set to drop in late January as part of the label’s Special Projects series.

‘The Jester’ opens the EP as Kirkaldy fuses slick, crisp percussion amongst murky swells and ever- developing, dubby chord arrangements, whilst ‘Tonic’ continues this aesthetic as transcendental melodies meet deep kicks and delicate hats to reveal a captivating journey across six and a half minutes.

On the flip, ‘The Days Are Longer Now’ utilises a skillful balance of emotive synths and refined kicks to deliver the most up front production of the package, before title cut ‘Lets Be Free’ closes proceedings as resonant melodies and paired back organic percussion patterns ebb and flow amongst pockets of intricate sound design to conclude yet another impressive release on the Berlin based imprint.

Roberto ‘Let’s Be Free’ EP is out on Rekids Special Projects on 25th January 2019.