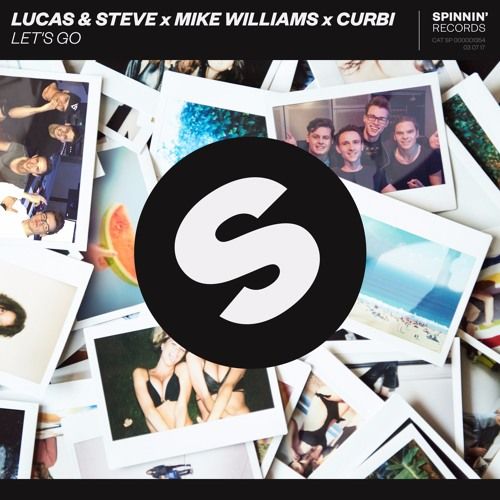 Currently riding high with his latest single ‘Let’s Go’ with Lucas & Steve and Curbi, Dutch producer Mike Williams launches a Polaroid Challenge to celebrate his latest release. Amidst his busy touring schedule, he has crafted an exclusive mix for 1001 Tracklists and has launched his DJ Mag Top 100 campaign.

Entrants of the Polaroid Challenge will need to upload a photo of themselves to the Spinnin’ Website, and watch it transform into a polaroid. One lucky winner will win a meet & greet with Mike, Lucas & Steve and Curbi, at this year’s Amsterdam Dance Event in October and will be eligible to attend some of the gigs they will play during the events and conference series.

The single ‘Let’s Go’ incorporates the impressive production skills of Lucas & Steve, Mike Williams and Curbi. The collaboration has already gained hundreds of thousands of streams in its first week of release, and the music video continues to thrive online.

Mike Williams says, "Working with these guys was really nice. Everyone was so into this record and the time we spent in the studio together was truly good fun! For me, it was the first time I worked with so many people at once, something I'm usually not a big fan of, but this simply was really cool. Of course, this also has something to do with us being good friends; we're always laughing, nobody was able to get serious for even a second. So, no idea how we pulled it off, but we did end up with a really amazing track!"

Elsewhere, the Dutch beatmaker has crafted an exclusive mix to 1001 Tracklists – Listen to the mixHERE. The mix includes Mike’s favourite songs of the moment, including tracks from the likes of Dave Winnel, Throttle and Fox Stevenson. His remixes of Throttle’s ‘Money Maker’, Galantis’ ‘Hunter’ and his own remake of his single ‘Another Night’ also make an appearance.

Not stopping there, Mike has launched his DJ Mag Top 100 campaign. He’s achieved astounding success throughout 2017 so far, ultimately propelling Mike as an artist to watch. After completing a successful run of dates at Miami Music Week last March, he brought out his singles ‘Another Night’ and ‘Don’t Hurt’, both tracks receiving critical acclaim.

Additionally, he was handpicked by dance heavyweights R3hab and Galantis, to provide official remixes for their respective singles. Together with the international demand for his live performances and several exciting releases to come, Mike is showing no signs of slowing down anytime soon.