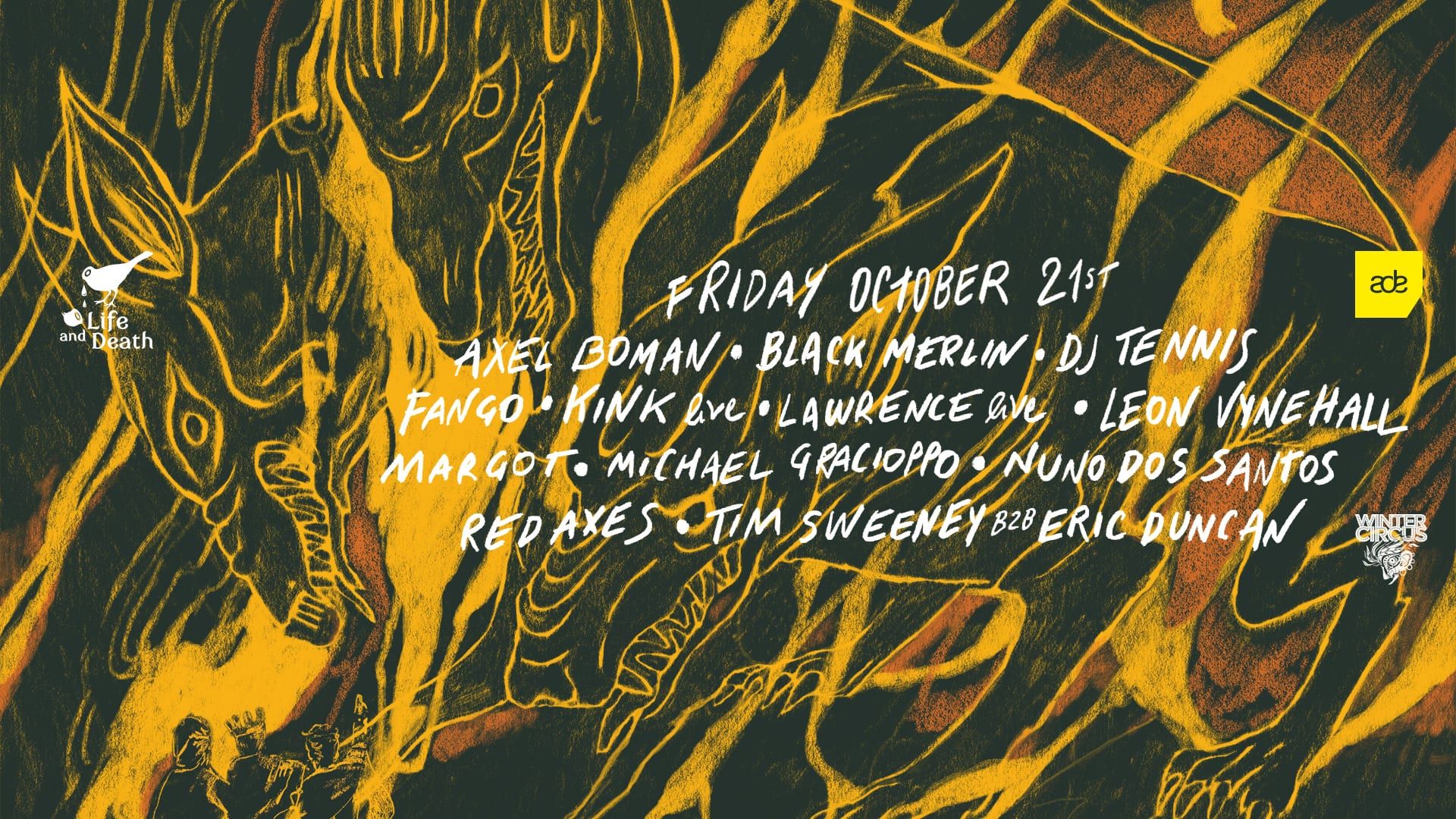 Life and Death are proud to announce a towering line-up for their ADE party this October at the uniquely intimate open air space Thuishaven Wintercircus on Friday 21st. A session showcasing the new musical direction of the label helmed by DJ Tennis, this party gives a real insight into some of the artists that he will be working with in 2017 on Life & Death.

Setting themselves apart from the city’s overwhelming schedule this autumn, Life and Death challenge their peers as to what a label showcase should be: a genuinely diverse and forward-thinking line-up which excites themselves as much as their followers.

Life & Death’s versatility is respected internationally and this day-to-dusk session continues to prove their weight here. From the brooding intensity of DJ Tennis to Axel Boman’s playful house, each artist provides a new twist and turn for the program, setting the pace for the definitive ‘Life and Death journey’.

Known for including DJs who are not signed to the imprint, this showcase is no different. Representing their international community this forthcoming party highlights DJ Tennis’s relationships with fellow labels as well as the relationships he’s formed with fellow artists he’s toured the world with.

Studio Barnhus’ Axel Boman, Black Merlin fresh from his recent well-received record on Dan Mitchell’s ‘Island Of The Gods’ and Leon Vynehall who’s 2016 release on Running Back scored huge acclaim this year all come together to feature under Life and Death’s masthead.

This session also includes live performances from the Dial’s Lawrence and KiNK (ranked the number one live DJ in the world by Resident Advisor last year) – adding yet more variety to this day of music.

Pushing their creative approach once more, they present a very special (and sure to be lively) b2b between NYC’S Tim Sweeney and Eric Duncan (one half of legendary DJ duo Rub-n-Tug & also half of DFA’s Still Going) – we can’t wait to see what they deliver.

Influences of the label’s global reach can be found throughout their programming too; Canada’s Michael Gracioppo (also known for his affiliation with Innervisions and Motor City Drum Ensemble), Israel’s rising duo Red Axes along with Dutch national Nuno Dos Santos all make appearances. Life and Death’s Italian stronghold hasn’t been forgotten either as natives Fango and Margot also feature.

”A Life and Death showcase is all about the vibe and the flow. There is no peak time and no peak artist; it's more about the experience. Every single artist playing the party is both a great producer and a great performer. Most of the artists playing are releasing or collaborating with the label…” Manfredi Romana (DJ Tennis and Life and Death label head)

Having stripped back Life and Death events in 2016 to just a handful of dates (Mexico, Spain, Lisbon and now Amsterdam), this is a rare chance to hear the family together. This party in particular puts itself as one of the biggest of the year with thirteen artists featured on the line-up.

Set on the outskirts of Amsterdam’s at the incredible haven of Thuishaven Wintercircus, Life and Death invites you to leave the bustle and business of ADE, a real party to escape to.

About Life and Death

Life and Death has a peculiar concept. The music in most cases hovers around a dark pop and house approach with a definite psychedelic sensibility.Soulful dance vibes with little pieces of a post-rock attitude. Not immediate dance floor bombs but melodic tunes built around the concept of incorporating influences of its Italian Cosmic Disco and UK/US New Wave and Indie heritage, but without the intention of "reviving" old sounds — instead creating new ones. It's a concept that maybe seems less peculiar after exploring the eclectic musical backgrounds of its founders Manfredi Romano (aka DJ Tennis) a longtime soundtrack producer and Greg Oreck, one half of New York house duo Thugfucker; who were later joined in this journey by Matteo Milleri from Tale of Us. After just a few releases it's a sound that's already found its way into the bacchanalian fray of some of the best parties worldwide.