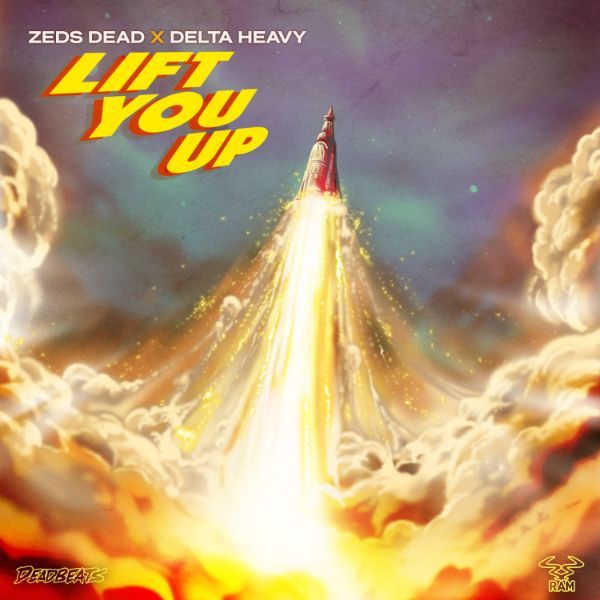 Kicking off 2019 with a statement of musical intent, Canadian heavyweights Zeds Dead and UK bass lords Delta Heavy join forces  for their mammoth new collaboration, the rumbling, dirty but delicate ‘Lift You Up’, out worldwide January 18th on Ram Records and Deadbeats.

A relentless roller from start to finish, ‘Lift You Up’ is peak time dance floor anthem at its finest. Combining depth defying drops, fluttering vocal samples and flawless switches in energy levels wrapped up in layer upon layer of honed melodic percussion, the quartet allows the cut to keep one foot soaked in the world of DnB, the other steeped in Stateside-style dub and bass. Having been first debuted at Zeds Deads & Deadbeats sold out annual 2 night stand at Red Rocks this past summer, the hotly anticipated release of this track has been a topic of discussion amongst fanbases for months now as both groups have relentlessly teased audiences with the track in their live sets.

Following the 2017 release of Delta Heavy’s remix of Zeds Dead’s “Lights Out”, the pairing between the two acts should come as no surprise to fans of either party. Both are widely revered for their ability to craft and create monstrous yet elegant productions; both actively look to transcend the limits of genres with their music, drawing on elements of hip-hop, rock, indie, even punk as heard in Delta Heavy’s previous single ‘Anarchy’. The two acts spoke about the single and the process of working together.

“We’ve been big fans of ZD for a number of years,” said Delta Heavy, “so when the guys hit us up about working on some music together we jumped at the opportunity.  The record came together pretty quickly, the essence of it being this catchy little vocal sample and the uplifting synth riff.  We’re really pleased with how it’s turned out and the reaction to it when we all play it live has been incredible, there’s a real buzz around it online.  To us it really sums up where we are at musically right now. ‘Lift You Up’ is a real melting pot of styles that – like us – straddles the Atlantic, fusing the traditionally energetic UK DnB sound with a bit of the more dubsteppy halftime stuff that’s big in the US right now.”

The single has already been a big hitter out on the road for Zeds Dead. “This is one of our favorite songs that we’ve put out in the last couple years,” the pair said. “It’s been really fun to play it in our sets and sort of have it as a cool unreleased track but now it’s time to let the people have it. In electronic music we always would like when an artist would have some unreleased music that you had to go to their shows to hear but you wanted it. Even though it’s only got a few lyrics to us this is a song about the human spirit and it’s amazing ability to triumph over adversity.”

UK duo Delta Heavy, who have been producing together since 2008, have refused to be constrained by genre limitations, resulting in a plethora of celebrated productions including ‘Ghost’, ‘Get By’ and their massive debut album ‘Paradise Lost’, which spawned the 18 million+ streaming monster ‘White Flag’.

Zeds Dead are one of the top EDM artists today. Their consistent stream of quality releases has won them the adoration of millions of fans and praise from the biggest names in music. Following the release of their long awaited debut album in 2016, Zeds Dead have continued to surprise old fans and gain new ones with a series of collaborations with Illenium, Ganja White Night, Jauz, 1000volts (Redman & Jayceeoh), and Snails. The new track comes right at the culmination of Zeds Dead's 2nd Annual Deadbeats North American and European tour which wrapped up at the end of 2018 in Brooklyn, NY, and just as they’ve announced their 6th Annual DEADROCKS event at Red Rocks Amphitheatre set for July 2nd & 3rd 2019.

As the brainchild of Zeds Dead, Deadbeats label recently released singles from Devault, DNMO, GG Magree, Hunter Siegel, an EP from 1788-L, the 3rd volume of the semi-annual WE AREA DEADBEATS compilation, and a critically lauded debut album from Shades entitled “In Praise of Darkness”. Forthcoming Deadbeats releases include 1000volts, Rusko, 1788-L, Peekaboo, and more.