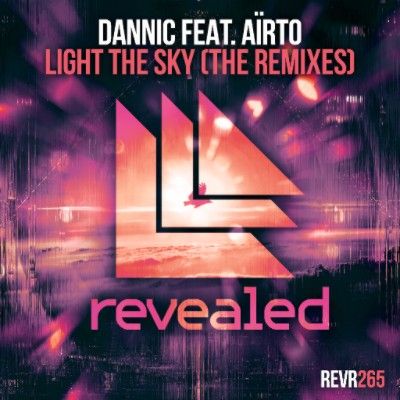 Merging the festival-dominating cut of Dannic’s radio-ready ‘Light The Sky’, alongside some of the industry’s finest up and coming talent, Revealed Recordings deliver 4 diverse club hit remixes delving into numerous, excitable realms of the electronic music spectrum.

First up on the list is a fine deep house cut from Charming Horses, introducing warm chord progressions alongside moving percussion hits, the track provides an uplifting groove perfect for warming up the dancefloor. Turning up the heat is a hard-hitting affair from Crystal Lake, jumping things off in force with a rolling beat alongside progressive synths that is undoubtedly poised for reign over Ibiza this Summer.

Swedish duo Rob & Jack take their third spot and fuel the flames even further, adding a Latin-house inspired take on the classic track, by merging lively drum work with synth rises, the pair tease the vocal into the mix with their unique production handiwork. Finishing off the selection is a hardstyle dancefloor annihilator from Devin Wild, a rising name that’s been on everyone’s ears ever since receiving support via Hardwell on Air for his track ‘Compound’, Devin twists Dannic’s original into a full-blown ear-destroyer, thanks to huge rocking drops and tough drum patterns.

With a rollercoaster of high calibre releases coming out across the summer season and beyond from Hardwell’s stellar imprint, make sure to cop the latest heater with Dannic’s ‘Light The Sky’ remix bundle, out now via Revealed Recordings!