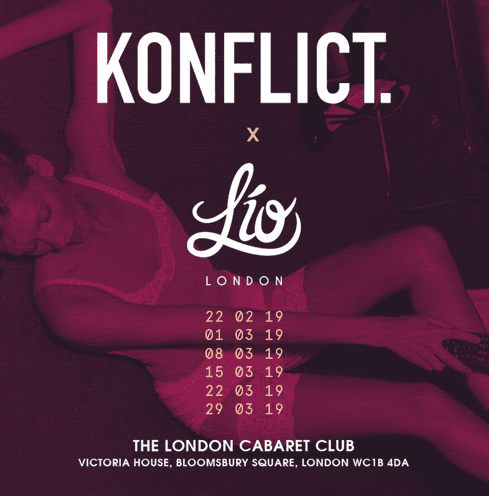 Set to completely redefine the Capital’s party scene,  Lio London is excited to announce it’s first official club party dates, in partnership with KONFLICT. Every Friday from February 22nd until March 29th KONFLICT is set to take residency at Lio London, at the London Carabet Club.  Calling out to a cosmopolitan crowd, after midnight when the magic of the cabaret and dining is complete, Lio transforms into an elegant and stylish club, welcoming Lio diners and walk-in guests alike to lose their inhibitions until the early hours.  DJs and further party nights will be announced shortly.

KONFLICT, a born and bred London brand will bring the late nights to Lio London every Friday with deep melodic house and techno from well-known artists.  Recognised for drawing in an influential crowd of models and actors KONFLICT is the perfect following act to take Lío London from dining to dancing until 3.00am.

In 2019, the spirit of the White Isle comes to the Capital with the launch of Lío London – sister to Ibiza’s most exclusive night spot. Set to take residency at The London Cabaret Club from Thursday 21st February for only six weeks, Lío London promises to pair world-class cabaret with Ibizan DJ’s and eclectic entertainment, for an immersive gourmet experience that’s not for the faint hearted.

Tickets can be purchased here.