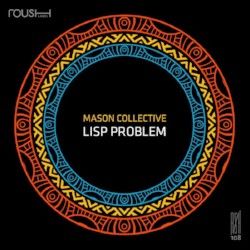 Manchester-based DJ and production trio, Mason Collective have delivered the release of their 3 track EP, Lisp Problem, which follows on from their widely acclaimed Buss It EP, released via Solardo’s Solä Records label.

Releasing through renowned tech-house producer and DJHector Couto’s prominent record label Roush, the EP arrives after a huge summer of tour dates and festivals for the trio, who made their Ibiza debut, playing at Privilege. The group also performed at Creamfields, Hideout, Parklife and Lost and Found, garnering a widespread fanbase as a result of their dynamic performances.

Featuring three-tracks that revel in their signature high energetic sound, the EP contains the tribal loops of deep club anthem ‘Lisp Problem’, as well as the rolling bassline of ‘Pre Almads’, a collaboration with Renko – the alias of eclectic ‘Uber’ producer LiTek. Rounding off the release with the brooding tones ofafterhours floorfiller ‘Body Move’, the EP arrives ahead of performances at Manchester’s iconic Warehouse Project, Forbidden 42, and their own Halloween party – as part of their successful event series MVSON – to round off the year.

Headed  by  Blair  Suarez,  Adam ‘Mase  Milo’ Myles  and  Omar  Guedar, the Manchester DJ and production trio have developed their own signature brand of high tempo, high energy  grooves and drawn strong attention in the underground music scene with their explosive DJ  sets. Since their inaugural release ‘Whippin’ on Wow Recordings, the guys have been tipped heavily in the dance scene, topping Beatport’s overall chart and gaining support from The Martinez Brothers, Jamie Jones, Loco Dice and Patrick Topping along the way.

With their unique sound and signature style, the Manchester trio have rapidly grown into an established dance music force, playing and hosting festival stages and events all across the UK.

Lisp Problem EP is set for release on 1st October.