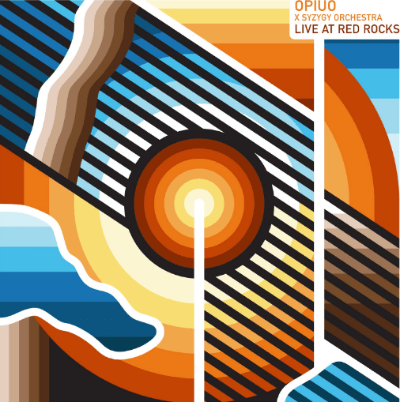 On Friday, September 21, the synth-led electro-funk and bass music performer/producer OPIUO is releasing the highly-anticipated live album from his headlining debut at Red Rocks earlier this year, Live From Red Rocks, where he played with a live orchestra for the very first time. Rather than tracks, the project moves from one Movement to the next, totaling in seven lush compositions.

In preparation for this show at Red Rocks in Denver, Colorado on April 21st, OPIUO spent six months deconstructing and transcribing his Syzygy EP with Tom Hagerman of DeVotchKa working on every detail, from the notes, to build, chorus, and every moment in between. The first time the 21 piece orchestra and OPIUO met was the day before the show where they fit in one rehearsal. Day of show, they were hit with uncontrollable circumstances at the outdoor venue, the weather. Due to snow, rain, and flooding, they weren’t able to get a soundcheck in before the doors opened, but the show must go on. Despite the freezing temperatures, thousands arrived for a night they couldn’t miss, and will forever remember. It was just how OPIUO imagined it would be.

Taking so much inspiration from the people he meets along his musical journey, OPIUO is giving back with Live from Red Rocks.

Along with the live recording announce, the album will also come as a vinyl later this year (November/December 2018). The physical form of the project will take the 2a-piece ‘Syzygy Orchestra’ from the beautiful Red Rocks Amphitheatre to speakers in fan’s homes.

Fans can pre-order the vinyl copy of Live From Red Rocks here:
https://opiuo-merch-store.myshopify.com/collections/frontpage/products/l…

In October, Opiuo will embark on his Syzygy World(ish) Tour, hitting markets across the U.S., Australia, and New Zealand. Full list of tour dates and ticket links below.

On November 5, he will also be bringing the live ‘Syzygy Orchestra’ out to play for the second time ever in Melbourne, Australia at the Forum. Check out the promo video here for more information & tickets:https://www.facebook.com/events/2157487797864725/.