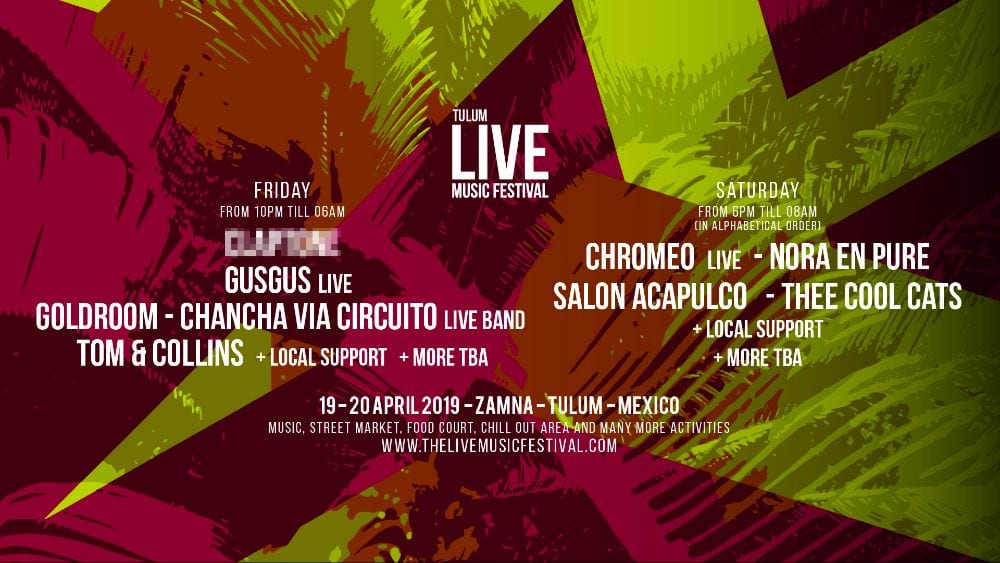 After announcing GusGus and Chromeo, Live Music Festival adds 6 new artists to its particular programme led by the most influential electronic and indie performances in the international scene.

This new festival in the area of Tulum will celebrate its first edition during Easter week  on 19th and 20th of April in Zamna Tulum.

A few days ago, the birth of Live Music Festival was announced, an event that once again makes the Mexican Caribbean an unavoidable destiny for the Latin American music scene. The event will take place from 19th to 20th of April in the idyllic spot of Zamna Tulum, with live performances of renowned international artists.

Joining GusGus who has already been announced for Live Music Festival are:

Goldroom, the most experimental Californian sound.

One of the most outstanding producers and songwriters of the current electronic music scene of USA has made of the Californian sound his distinguishing mark, taking itto never before explored places. His debut album “West of the West” is the best proof of this.

The producer Pedro Canale is behind the creation of this project whose aim is to explore the electronic sound in combination with the native rhythms of South America as the folk, the Mexican sonidero, the Colombian, Peruvian and Argentine cumbia.

Influenced by deep house, techno and house music, this Mexican duo of DJs and producers has managed to create a new electronic sound that makes everybody move their feet. They’ve played at festivals such as EDC, Beyond Wonderland, The Day After and Wish Outdoor.

The artist from Switzerland is considered as the new sensation of the dance music deep house scene thanks to her particular and beautiful blend of electronic beats accompanied by intricate instrumentals and enlightening melodies. As a DJ or as a producer Nora en Pure turns  everything she touches into gold.

Simple and direct. That’s the proposal of this band that combines an iconic house sound with elements from the characteristic rhythms of the tropical and Latin area with the only purpose of turning their performances and productions into a truly idyllic electronic oasis.

The love for hip hop, nu disco and funky beats join together the Mexican artists Gerry G. and Toni E., an electronic duo that chases different styles and identities and who are always trying to expand and improve. Nervous Records, CUFF, Get Twisted and FACELESS are some of the labels that have released their raw electronic music.

More confirmations will soon be announced but you can now buy your Early Bird tickets: