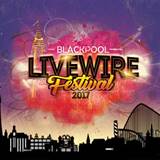 Livewire Festival announces the support acts for its inaugural year, which will feature Motown legends The Jacksons, who have just wowed Glastonbury audiences, as well as the first ever UK live performance for Will Smith & DJ Jazzy Jeff.

Kicking off for The Jacksons on Friday 25th August will be British soul legends The Christians and Mica Paris. The support for Will Smith & DJ Jazzy Jeff on Saturday 27th August will feature the legendary party-starter Fatman Scoop and UK dance duo Phats and Small. Blackpool girl group Tiger-S will also be bringing their fresh pop stylings to the final night.

The Christians have been described as “the Temptations with ripped jeans”, whose ‘socially-aware soul music’ made an impact on popular culture in the 1980s. 2017 is the 30th anniversary of their self-titled multi-platinum debut album. Mica Paris is the Queen of UK soul music, as well as a respected actor, radio and TV presenter. She has just released a new album ‘Mica sings Ella’, a tribute to the music of Ella Fitzgerald.

Everyone will recognise Fatman Scoop’s gargantuan hit ‘Be Faithfull’, and so many party tunes he features on with P.Diddy, 50 Cent, or Timbaland to name a few. Dance music duo Phats and Small are best known for their international hit ‘Turn Around’. Since forming in the late 1990s they have continued to work with the biggest and best in electronic music including Carl Cox, Daft Punk and Jean Michelle Jarre.

“We are thrilled to be sharing the stage with two legends, to us it's the stuff that dreams are made of. Only last year we were watching from the crowd whilst the great DJ Jazzy Jeff tore down a club in Amsterdam with an incredible DJ set. 27th Aug will not only see us supporting the man himself but also his partner in rhyme the legendary Will Smith aka The Fresh Prince. We are proud to say that for Phats and Small it definitely puts our summer summer time on smash, we can't wait!!!” Ben Ofoedu, Phats and Small.