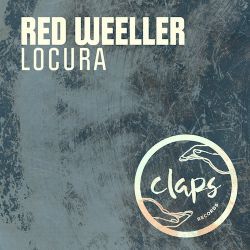 Ready to rock Summer 2016, Claps Records welcome Greek producer Red Weeller to the fold with his scorching slab of hypnotic Tech-House drizzled with mysterious fem vocals, 'Locura'. Also on the package is a mix from the ever popular 2 Sides Of Soul, who turn up the synthestats and inject a bubbling bass teased with exotic hooks, giving a Middle Eastern flavour. Fellow Greek Elias Tzikas turns on his Tech charm, implanting haunting synth stabs, electric tension filled arpeggios all set to beautifully crafted beats.

Red Weeller has been Djing and releasing music since 2009. Originating from Thessaloniki, made his first contact with music at the age of 8 when he started taking Keyboard, Guitar and Bass lessons. At the age of 17 he started Djing. He quickly gained reputation and performed in various Venues around Greece and Thessaloniki. Influenced by Dennis Ferrer, Maceo Plex, Carlo Lio and more, his style is Tech House with raw groovy basslines and underground synths. He has released music on Defineds Music, Twisted Fusion, Bad Mood Records and Not For Us and many more. Red Weeller also hosts the "Isle Of Techouse" radio show on eXtreme Radio alongside guests from all over the world.

'Locura' will be released on June 14th 2016 on Claps Records