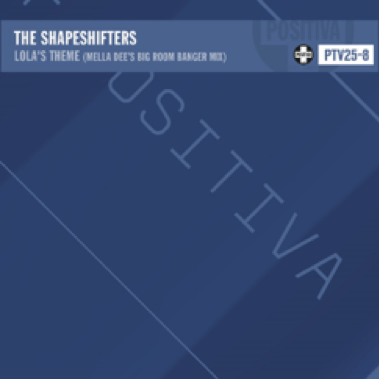 Positiva Records continue their 25th-anniversary celebrations with London based DJ and producerMella Dee delivering his rework of The Shapeshifters’ classic hit ‘Lola’s Theme’.

With house duo Max Reich and Simon Marlin (aka The Shapshifters) releasing the chart-topping single onPositiva 15 years ago, the record became one of the imprint’s most successful of all time reaching #1 in the UK Official Charts.

Cementing his reputation as a producer keen to experiment with a wide range of sounds, London based DJ Mella Dee (aka Ryan Aitchison) creates a unique blend of driving techno by fusing elements of house with essences of the dance music spectrum. The remix follows his previous success with the infectious ‘Techno Disco Tool’ which has amassed over 5 million Spotify streams and gained support from key tastemakers such as Pete Tong, The Black Madonna, Danny Howard and Annie Mac.

Mella Dee enjoyed a meteoric rise through the course of last year where he was named as one ofMixmag’s ‘Artists of the Year’ and made his BBC Radio 1 Essential Mix debut. He recently kicked off 2019 with two NYD performances at both Bristol’s Motion venue and The Warehouse Project in Manchester. He will also be playing a string of all night long dates across the UK and Europe, with sold out shows across Sheffield, Glasgow, Edinburgh and Leeds.

With Mella Dee’s remix following a stellar 2018 for Positiva celebrating their 25th anniversary, the imprint has showcased a series of one-off parties and special releases throughout the year including reworks of several classics from the likes of Eats Everything, Yotto, Mele, Shadow Child, and many more.

With Mella Dee’s ‘Lola’s Theme’ rework set to drop on Friday 8th February, a limited edition vinyl will also include the original, and a rare Eric Prydz remix from 2004.