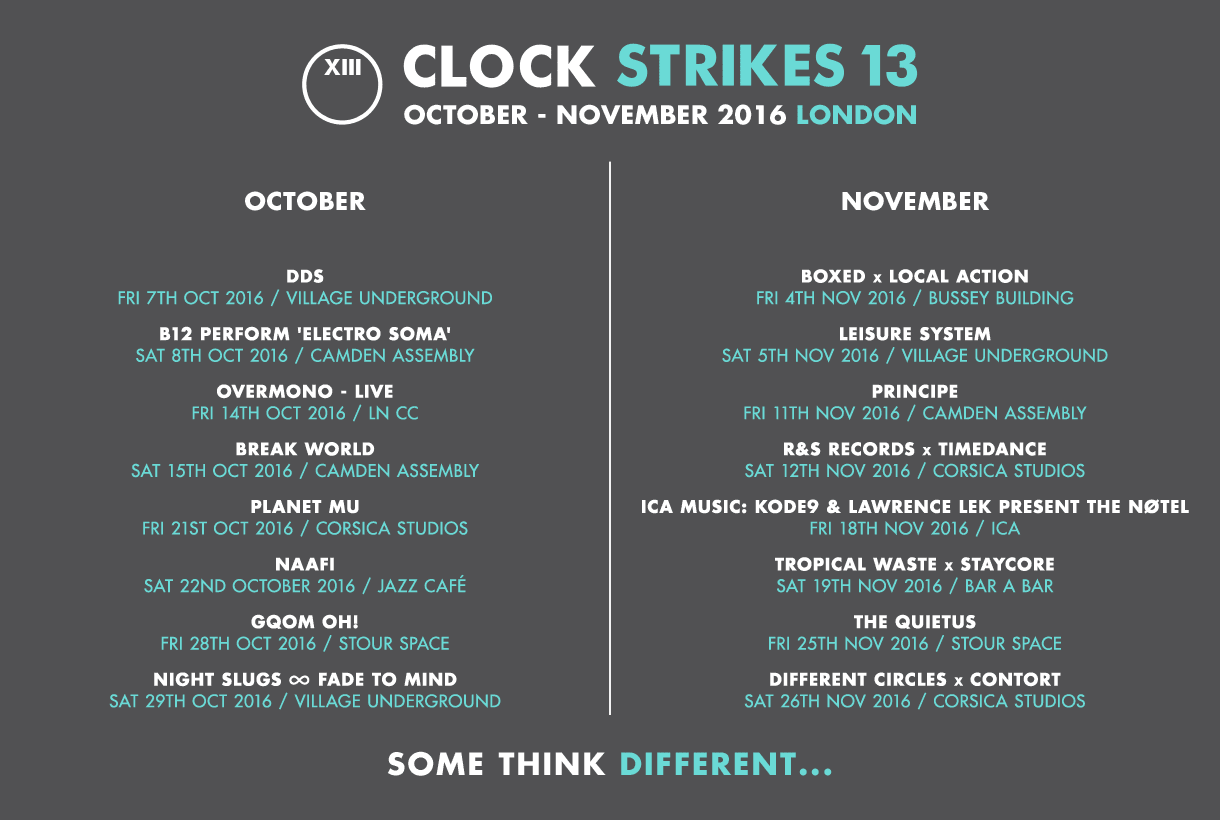 There may be a black cloud over London’s clubbing landscape right now, but we can only keep going and continue to dance on the dance floors we have left…

Pushing forward into the future, Clock Strikes 13’s 2016 feels timely. They return to the capital for their second series this autumn with an even stronger fire than before. Staying true to their authenticity, CS13 are set to bring together the city’s most unique labels, influential artists and revered venues to present an uncompromising two-month program. A community made from the cornerstones of the city’s musical underground, Clock Strikes 13’s latest installment is a force to be reckoned with.

We’re proud to announce the program for Clock Strikes 13 2016 edition… Refusing to chase after the one headliner or the one sound, CS13 thinks different. Though the word underground gets batted around all too easily CS13 presents a true insight into the flipside of the mainstream.

Exciting for both the promoter and the audience, CS13 is London’s alternative nightlife option. Thoughtfully curated line-ups give way to the known and unknown. Unfamiliar with some of the names listed? Trust in the program that these artists will be your next obsession.

CS13 will land at the likes of Village Underground, Corsica Studios, The Jazz Café, Stour Space and the LN CC throwing parties across the capital.

With each party showcasing another face of the underground, it’s hard to pinpoint personal favourites though watch out for the opening date: DDS Records and Baba Yaga’s Hut present a trio of live performances including label head Demdike Stare, Sunn O)))’s Stephen O’Malley and the incredible talent of Michachu. The first ever DDS party in their history.

The notion of ‘firsts’ carries through the whole series, with acute attention given to making this 2016 edition a platform for special one-offs and debuts.

Truss and Tessela present their new project Overmono (signed to XL Recordings) to the public for the first time on Friday 14th October at the LN CC.

Brooklyn’s Dylan Scheer aka Via App makes her London debut as part of the CS13 schedule. Her intelligent approach to electronic music has seen her become one of the most sought after emerging artists of the year.

Their first collaborative event ever, London and LA collectives Night Slugs and Fade To Mind come together on the Halloween weekend to feature three stacked b2bs.

Dopplereffekt will debut his live show for the Leisure System family on Saturday 5th November at Village Underground. Same for Kode9 who’ll make the UK debut of his new audiovisual show, The Notel, created along with German artist Lawrence Lek in partnership with The ICA.

Clock Strikes 13 is brought to you by the team behind London heavyweight club venture The Hydra.

Armed with an uncompromising vision for the future of electronic music, Clock Strikes 13 is a new event series that aims to break new ground by uniting iconic labels, influential artists and revered venues in a way never done before. Across the series, CS13 will journey through sounds that span bass, house and hip hop through to electronica, techno and myriad hybrid genres in-between.