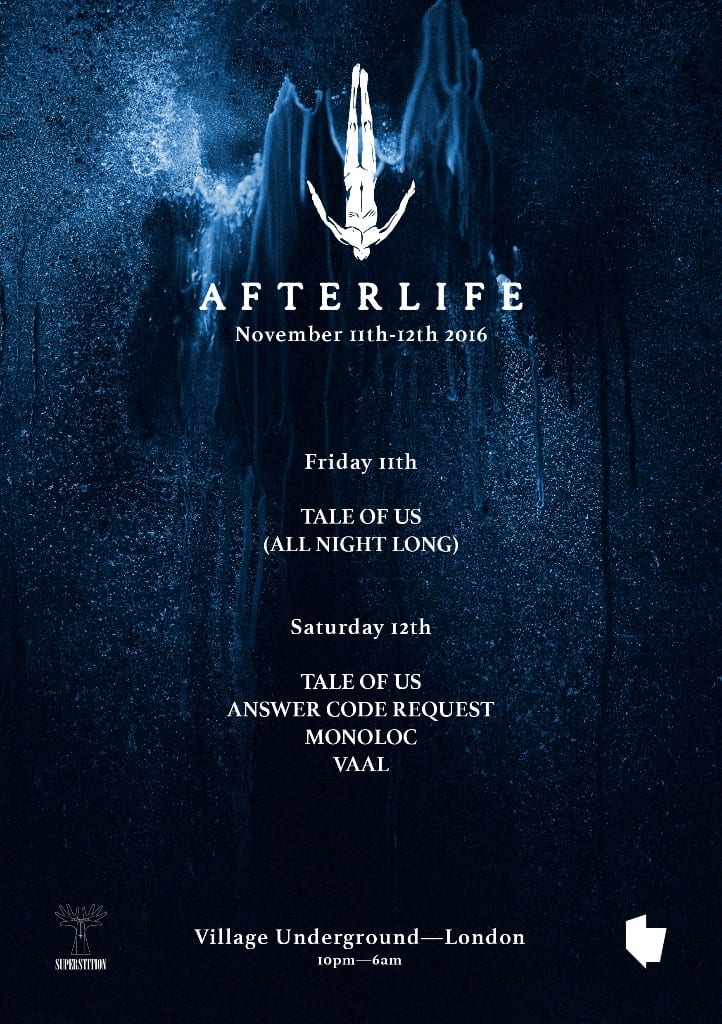 The duo will play all night long on Friday 11th, and welcome Answer Code Request, Monoloc and Vaal on Saturday 12th

TALE OF US (ALL NIGHT LONG)

Afterlife, an odyssey through the realm of consciousness. An event concept characterised by mesmerizing soundscapes and lush rhythms designed for the senses. A rebellion from convention into a dimension where music guides the resurgence. From hypnotic bass lines to energetic crescendos, the nuance of an immersive experience is there for the exploring.

Having launched their spellbinding Afterlife concept in Barcelona back in June, Tale Of Us’ 13-week residency at Space Ibiza has quickly made a name for itself as one of the island’s best new parties. An amalgamation of the Berlin duo’s innovative vision and tight programming that has welcomed world renowned techno acts such as Dixon, Recondite and Rødhåd – plus a selection of progressive live acts such as Bob Moses and Rival Consoles – Afterlife will now make its eagerly anticipated London debut with a weekend takeover at Village Underground on Friday 11th and Saturday 12th November 2016.

Brand curators Tale Of Us will take the helm on Friday night with their appearance marking their first ever all night long show in London. Renowned for their innate ability to deliver raw and emotional techno which was most recently demonstrated via their ‘Realm Of Consciousness’ compilation, Matteo and Karm will then be joined by fellow Berliner and Osgut Ton affiliate Answer Code Request on Saturday 12th November. Also confirmed for this experimental weekend takeover is Monoloc, whilst Vaal rounds off the bill ahead of her upcoming Afterlife EP release.

Friday 11th November: Tale Of Us (ALL NIGHT LONG)