Following the release of his soft and soulful number “GYMH”, London-based singer and songwriter ANDRO returns with the politically charged single “Lost Cause”, offering a thought provoking commentary on institutionalised racism in society today.

Co-produced with Mathias Boman, “Lost Cause” is enriched with funk-filled basslines and warped synth patterns as ANDRO’s distinctive vocals soar over the complex musical terrain. Sirens wail in the background, gradually making their way to the surface as the alarm bells earmark the threatening proximity of police brutality.

“‘Lost Cause’ is an elucidation that our collective work isn’t finished” ANDRO offers. “It was written in a moment of my own despondency to current events and a comment on the historical beliefs of the Lost Cause of the Confederacy, which has fed Police Brutality and White Supremacy to this day, in-spite of this I want the listener to find a new sense of fight and hope.”

ANDRO has always had a passion and desire to create. His musical break came with Mercury Prize-nominated band Jungle, where he performed to packed out venues around the world, including acclaimed appearances on The Jimmy Kimmel Show, Coachella, Seth Myers and Jools Holland.

ANDRO is carving out a name for himself in a crowded musical landscape. 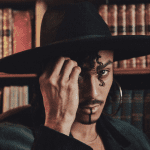