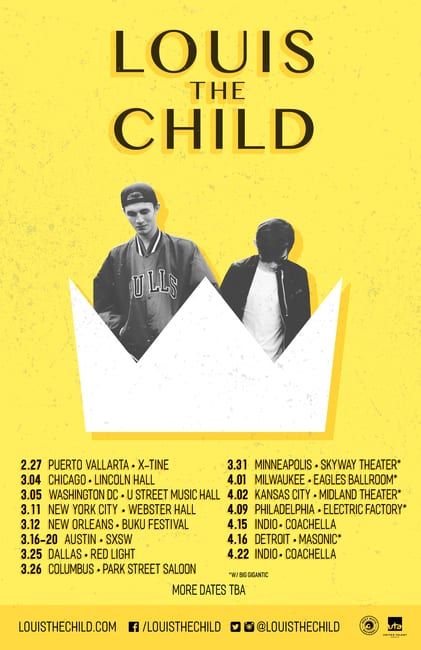 Chicago duo Louis The Child is taking their dreamy dance-pop sound on the road with a string of North American tour dates.

In the last few months the fast-rising tandem traversed the U.S. on their “It’s Strange” tour, named after their breakout hit featuring K. Flay which was championed by the likes of Taylor Swift and Lorde. “It’s Strange” quickly climbed the ranks to #1 on HypeM and #2 on Spotify’s viral chart, and the vibey vocal singalong was picked up by EA Sports for the FIFA 16 soundtrack as well as aired on both mtvU and MTV Hits’ Clubland segment.

Selling out its past 10 shows, the “It’s Strange” tour stopped through cities like New York, Los Angeles, Chicago and Boston with a special festival performance at SnowGlobe in Lake Tahoe. Louis The Child will continue their stateside run this year by making their Coachella debut, performing at both SXSW and Buku Festival, and playing shows alongside jamtronica icon Big Gigantic in markets including Philadelphia, Detroit, and Minneapolis to name a few.

Louis The Child’s mellifluous catalogue of grooves speaks for itself. Last year the pair of full-time students reupholstered Kaskade’s “Never Sleep Alone” into a shimmering, synthesized opus of uptempo beats, and just this week they dropped dreamy reworks of both Ty Dolla $ign’s “Blasé” and Miike Snow’s “Genghis Khan.”

Named one of Complex’s ‘10 up-and-coming DJs who should be on your radar in 2016’ as well as Snapchat’s ‘Artists to Watch for 2016,’ it’s full speed ahead for this dream team as they continue touring the country and putting the finishing touches on their debut EP due out this spring.